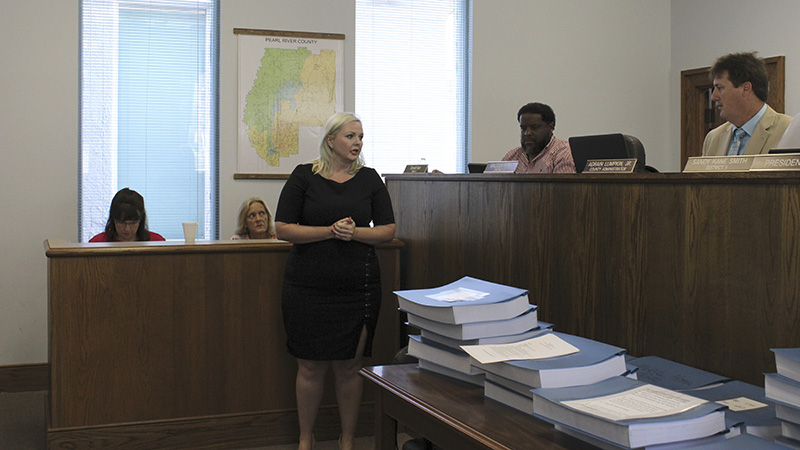 Chief Public Defender Lindsay Watts speaks to the Pearl River County Board of Supervisors about the decreased days inmates now spend in the county jail after the establishment of her office. Pearl River County was the seventh county to open a full time public defenders office in 2017.

The number of days inmates spend in county jail has significantly decreased since the establishment of a fulltime public defender’s office in Pearl River County in 2017, said Chief Public Defender Lindsay Watts.

Watts spoke at the Board of Supervisors meeting Monday about the achievements she and her staff have made over those two years.

Watts believes the reduction in the number of days inmates are spending in county jail is due both to her office’s work and to a Mississippi Supreme Court decision handed down in July of 2017 that allows people with no prior offenses who are facing nonviolent felony charges to receive reduced bonds, she said. The Pearl River County Public Defender’s Office has actively tried to pursue that rule, Watts said, which means that more people are released on lower bonds and unsecured bonds, instead of waiting long periods in jail for a court date or indictment.

The reduction in the amount of time people are spending in county jail reduces the cost to taxpayers, Watts said, and having a full time public defenders office helps Pearl River County meet its constitutional obligation to ensure those who cannot afford a lawyer are appointed one.

“Everyone has a right under the sixth amendment to the Constitution to legal representation if they can’t afford it,” Watts said. “We fill that slot. We’re concerned with fulfilling that obligation to provide legal services to people who are indigent.”

In 2016, county jail inmates spent an average of 29 days in the correctional facility, but so far in 2019 the average has been 17 days.

According to jail staff, it costs the county $38.63 per day to house one inmate, Watts said. The estimated difference in the number of days inmates spent in jail in 2016 and 2019—48,000 days—will save the county $1.8 million Watts said.

Pearl River County is only the seventh in Mississippi to open a full time public defender’s office, Watts said.

Currently, the office employs three full time public defenders and only handles felony cases, said 15th Circuit Court Judge Prentiss Harrell, but in the future he hopes the office will hire a recent law school graduate who can be trained to begin working on misdemeanor cases. A recent graduate would cost the county less money to employ than someone with more experience in the field, Harrell said. A private attorney can still be appointed as a public defender for a misdemeanor offense, Watts said.

Public defenders are involved in the process from a person’s arrest to the actual trial and they make court appearances at all levels in the county, Watts said. As of June 1, the office’s three public defenders have resolved 155 cases this year, Watts said. That number does not include cases still pending, Watts said.

The county is unquestionably giving better representation to people who need court appointed attorneys than it was before the full time public defender’s office was established, Watts said. The office’s secretary can also help people get their questions answered more quickly, Watts said.

“The level of service that we’re able to give here because we’re full time is very different,” Watts said.

Harrell said he was grateful to the Board of Supervisors for supporting the establishment of the office.