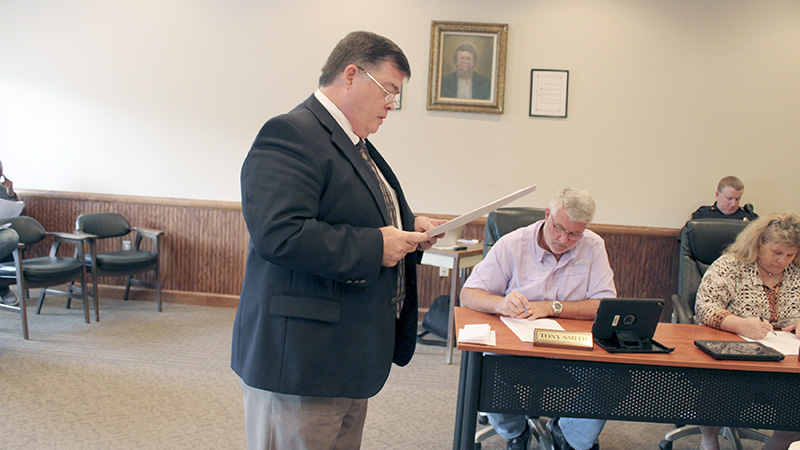 STAFF ADDITIONS: Poplarville Police Chief Greg Hartley asks the Board of Aldermen to hire new police officers during Tuesday’s Board meeting. The Board authorized the hire of one full time officer and two part time officers. Photo by Cathy Cook

The Board of Aldermen awarded a bid for $385,925 to Hensley R. Lee Contracting for culvert replacement and associated drainage structure repair as part of phase two of the 2019 Road and Bridge Bond Program at Tuesday’s meeting.

Jason Lamb with Walker Associates said he believes the project should address all drainage issues that are a result of ditches or culverts. There are 11 sites that will undergo repair as part of the project, Lamb said. The project will be funded by a bond that will be repaid from fuel diversion taxes, according to previous coverage.

Penton is currently a full time police officer with the Picayune Police Department with approximately two years of experience, said Police Chief Greg Hartley. Smith also works with the Picayune Police Department, is originally from Poplarville so is familiar with the layout of the city and has received good recommendations from his supervisors, said Hartley.

— Authorized the purchase of a truck to replace a salvaged 2015 Chevy Silverado for the public works department. The insurance settlement proceeds for the Chevy Silverado was $19,750. The recommended replacement truck is a 2019 Dodge Ram 1500 for $20,945 from Landers Dodge.