Moms seek out community and curriculum 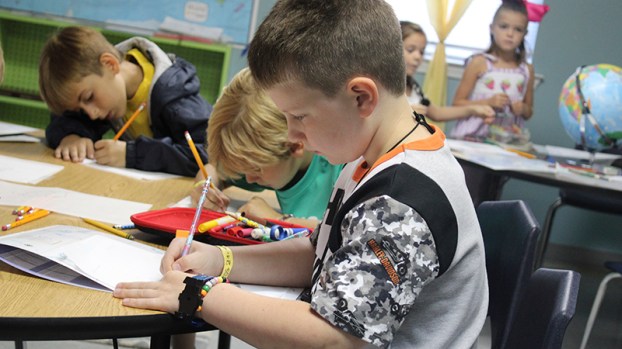 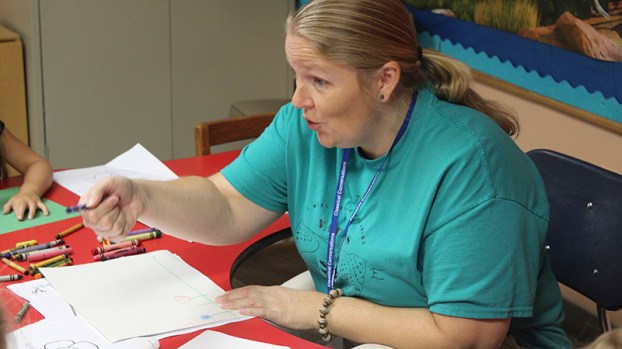 Mendy Mckenzie teaches three to five year olds how to identify the parts of flowers and the phases of the moon Wednesday during a Classical Conversations practicum at the Roseland Park Baptist Church. While moms listened to lectures on teaching methods, their kids were in classes with volunteers like Mckenzie. Photo by Cathy Cook. 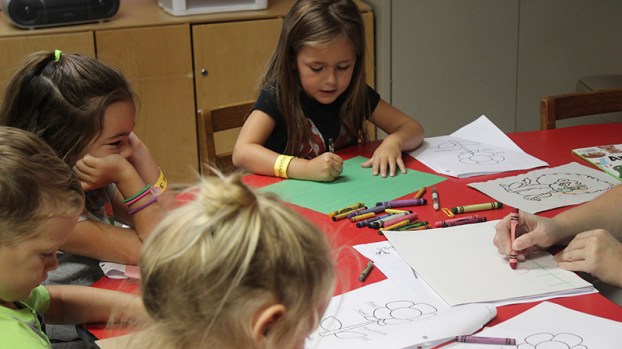 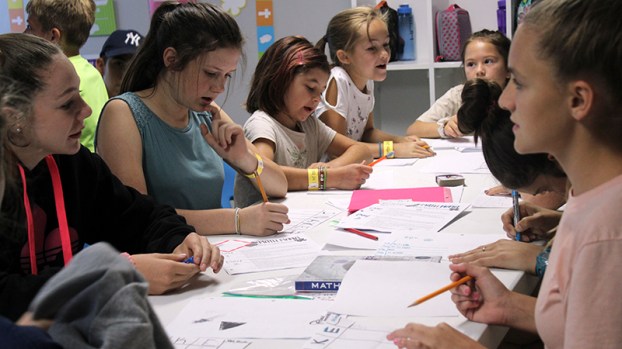 Catherine Griffin pulled her son Myles Griffin out of public school in first grade because he has ADHD and frequently gets up in the middle of class and walks around, Griffin said.

“He was getting in trouble at school for things he couldn’t control,” Griffin said. “He was crying every morning.”

Now Griffin teaches her son at home, where he is able to take frequent breaks from schoolwork to go outside. Sometimes lessons take place while Myles bounces on a small trampoline, Griffin said.

The Pearl River County homeschooling community is predominantly moms who stay home to teach their kids, said Kelli Garcia, who has been homeschooling her three children since 2012. Garcia’s kids never entered the public school system, she said.

“I wanted to give my children a Biblical education and have quality time with them,” Garcia said.

Jessica Bennett was pulling one of her daughters out of school almost once a week to go to doctor’s appointments, she said. As absences built up, Bennett decided to educate her three children at home.

“It’s a full time job, but it’s worth it because I get to live life with my kids,” Bennett said.

The benefits of homeschooling, according to Garcia, Griffin and Bennett, include the ability to customize an education to a child’s learning style and the flexibility to spend time with family.

Finding a curriculum can be a challenge when parents begin homeschooling, said Charlene Miller, who homeschools her four kids. In Mississippi, parents are not required to teach specific subjects to their kids when homeschooling, Garcia said.

Miller uses a combination of several curriculums, some of which are based in the Christian faith, she said. It can take several years to find a curriculum that works well for an individual child, Garcia said.

Miller will spend over $2,000 this year on curriculum, books to build literacy and extracurricular activities to educate her four kids. Garcia spends roughly $300 a year on curriculum for her three kids, while Griffin uses a free curriculum, so her homeschooling expenses are roughly $30 for extra books and science project supplies.

Organizations like Classical Conversations and the Pearl River County Christian Home Educators Association connect parents who homeschool with each other.

In Classical Conversations, groups of homeschoolers meet once a week to teach kids together, said Bennett who is an independent contractor for Classical Conversations. Between Picayune and McNeill, roughly 30 families participate in the Christian centered program, Bennett said. They also hold teaching practicums for parents around southern Mississippi.

The biggest misconception about homeschooling is that kids will not learn how to socialize, said Garcia. However, PRC CHEA meets once a week so students can socialize with one another, and organizes a monthly field trip where families participate in activities like packing Bibles, watching orchestra concerts or visiting the Picayune municipal airport, Garcia said.

Along with Classical Conversations meetings, Chelsea Modisette’s daughter, who began being homeschooled in first grade, stays busy with gymnastics, violin and piano lessons, an art class and the 4H shooting club, Modisette said.

A year and a half into homeschooling, Myles Griffin said he enjoys the frequent breaks he gets from schoolwork.

“Whenever I started homeschooling, I didn’t (have many) friends, so I started Lego Club,” said Griffin.

Now Griffin meets with his friends at Lego Club in the Poplarville library, he said.