Highway 11 widening to begin within 30 days 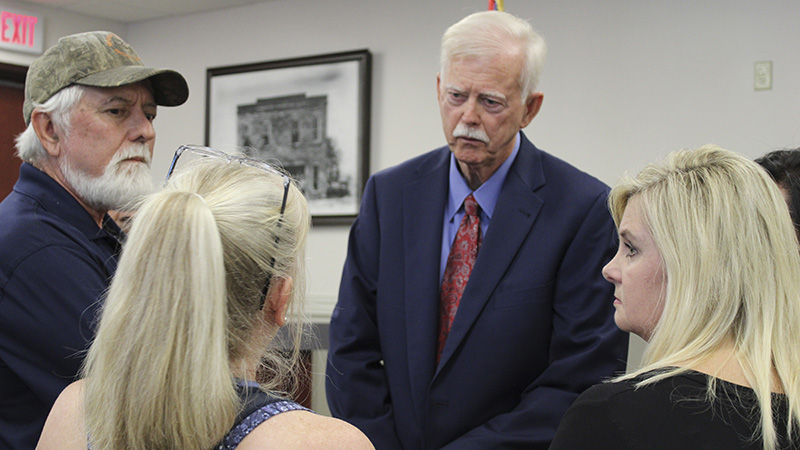 Tom King speaks with local business owners Jerry and Gloria Glidewell about the project to widen Highway 11 at a press conference Wednesday. MDOT received initial approval for $25 million to fund the project. Photo by Cathy Cook

Work to widen Highway 11 from the intersections of Cayten Street and Lakeshore Drive will begin within the next 30 days, said Tom King, Southern District Transportation Commission at a press conference Wednesday.

The Mississippi Department of Transportation has initial approval for $25 million for the two-phase project, King said. Phase one will entail widening Highway 11 to a four-lane highway with a raised center median, King said. The highway will have drainage improvements, King said.

Phase two will replace the bridge over the East Hobolochitto Creek and improve Highway 11 from the intersection of Cayten street to Fourth Street, King said. Phase two is expected to begin within the next eight to ten months, but there is not an exact start date yet, King said.

The replacement bridge will feature a walkway for pedestrian traffic and an approximately four-foot high barrier between pedestrians and vehicle traffic, King said. The pedestrian walkway will be well lit and improve safety for motorists and pedestrians, King said. Sidewalks and lighting will not be added to the rest of Highway 11, King said. The total project will probably take up to three years to complete, King said.

Drawings for the design of the project are available in the Hattiesburg and Jackson offices, King said.

Handy Cleaner owners Gloria and Jerry Glidewell said they are not opposed to progress, but are concerned about the impact widening of the road could have on their business. They also aired complaints about being notified of the meeting the same morning it was set to take place. Gloria Glidewell said they were frustrated that they were not notified days in advance of the press conference.