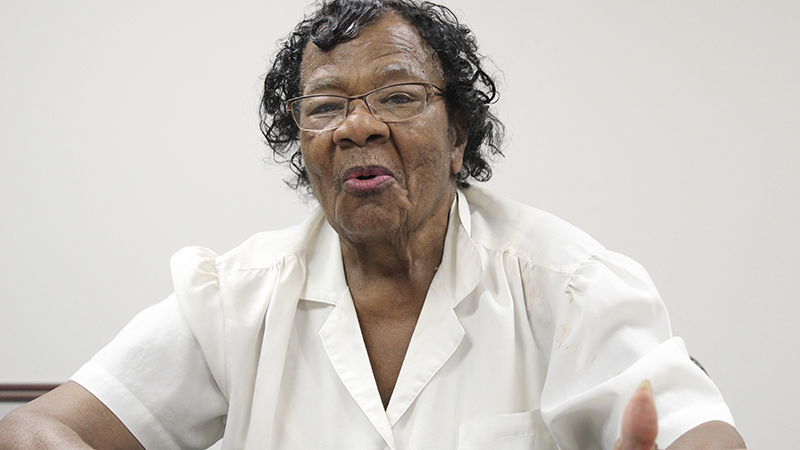 Christine Doby discusses her 37 years as a teacher in Picayune public schools. Doby was honored by a former student Saturday at the Knights of Columbus Hall during a George Washington Carver High School reunion.

Retired home economics teacher Christine Doby was honored Saturday at the Knights of Columbus Hall with a plaque from a former student, Antoinette Gillis, as part of the George Washington Carver High School Reunion for anyone who graduated from the school during its history.

The plaque recognizes Doby for her unconditional love and faith. Doby inspired Gillis to work as a seamstress and open a catering business, said reunion committee member Alma Hayes.

“As a teacher, she touched so many lives, she inspired so many of us. She just held our hands and encouraged us and pushed us forward and we appreciate that,” Hayes said.

Doby worked at the George Washington Carver High School from 1952 until schools were integrated in 1970, she said. Doby continued her teaching career at Picayune Middle School, and eventually Picayune High School until she retired in 1989.

“I enjoyed my work. Teaching was God’s will for my life,” Doby said.

As a teacher in Picayune in the 50s, Doby was asked to attend the churches of all of her students so that teachers did not show favoritism to one student or church, she said. She attended services in at least five different black churches every month, including Pilgrim Bound Baptist Church, where she has been a member since 1953.

When schools in Picyaune integrated in 1970, Doby told administrators at Picayune Middle School that she was willing to teach white students as long as they followed her instructions, but would leave if students would not listen to her. A white teacher at the school said the same thing about the black students, Doby said, so the two teachers supported each other in disciplining students.

Discipline in the school system changed dramatically over the course of her teaching career, Doby said, and administrators used to work very closely with parents to discipline children. Students who acted out could be physically whipped in school when she began teaching, Doby said. However, Doby preferred punishments like lunch detention over spankings, because she believed they were more effective, she said.

The reunion also named Willie Ellis and Etta Scott as George Washington Carver High School’s first Reunion King and Queen Saturday, because they are active in the community, Ellis said.

A graduate of the class of 1968, Scott said everyone wanted to attend George Washington Carver High School when she was in school.

“Values and the importance of getting an education were instilled in the students that attended Carver by the teachers, and we as the alumni thank all that were a part of our lives during that era,” Scott said.

Ellis played quarterback on the high school’s football team, he said, and would later play football at Southern University and A&M College in Baton Rouge and subsequently signed with the Kansas City Chiefs, he said.

He is still close with the friends he met at Carver, he said.

Both Ellis and Scott are excited to vote for the next King and Queen when they hold another reunion in two years.

Cutline: Christine Doby discusses her 37 years as a teacher in Picayune public schools. Doby was honored by a former student Saturday at the Knights of Columbus Hall during a George Washington Carver High School reunion.