Experienced defense looks to be better on third down 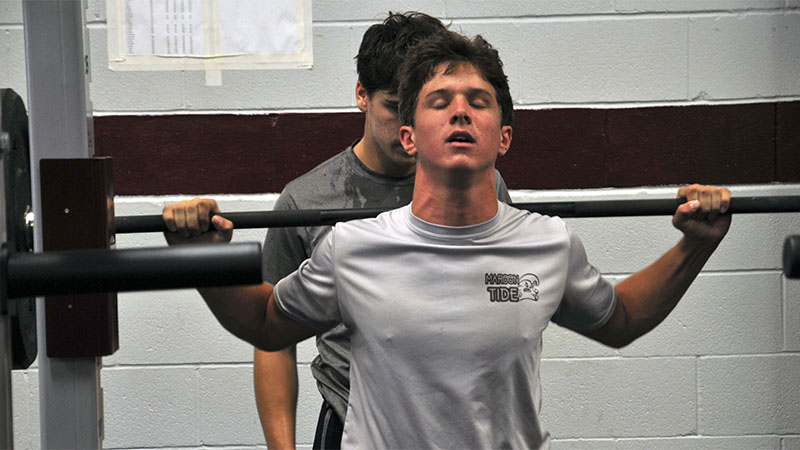 Jonathan Mitchell | Picayune Item The time is now: The football team has spent many hours over the summer getting faster and stronger. The weight room allows the athletes to go through a variety of stations during the session.

The defensive side of football can be less heralded due to the explosive nature of scoring plays of the offense.

However, that doesn’t make the defense any less important, and the Maroon Tide’s Defensive Coordinator Ty Trahan said that his team would improve upon last year’s performances.

“We were too inconsistent, and we sometimes didn’t do a good job of getting off the field on third down,” Trahan said.

“We also need to tackle better than we did last year.”

It wasn’t all negative for the defense, with Trahan saying the unit did a good job of stopping opposing running plays last season.

They run a variety of schemes and set ups, and Trahan said that the team adapts to the personnel they have available and the opponent they’re up against.

“We do disguise our coverage at times, and we do a good job with our blitz packages,” Trahan said.

“We’re not scared to go against different teams, we’ll do whatever we need to do to win.”

That mentality is reflected in the expectations Trahan has for his players. He wants his athletes to play with passion and effort, but he knows it all starts with the coaching staff.

“I try to set the example every day for them,” Trahan said. “It’s hard to ask them to be passionate and play with a lot of heart if I’m not coaching that way.”

The secondary played in multiple seven on seven games this summer, and Trahan said the experience gained from those competitions has been very beneficial.

“The guys have improved and it’s really helped us shore up our coverage,” Trahan said.

Offseason workouts have yielded results, with the players progressing both on the field and with their speed and strength. The exercises are intense, but the players’ work ethic is what sets them apart and gets them through the training sessions.

That tenacity is especially important on defense where the athletes have to be in attack mode on every down.

The improvements Trahan has seen has led to a new set of expectations for his unit, and he wants to continue to see their progression as the season goes on.

“We have goals for each game as far as points we want to hold the opponent to, but I just want us to continue to get better,” Trahan said.

“I think we’ve got those kinds of kids that understand what’s at stake.”

Trahan said a lot of starters are returning to this year’s defense, including some players who came up big last year.

With the experience and depth they have on that side of the ball, Trahan is eager for the season to start.

“Even with the people we are replacing there’s not going to be any drop off,” Trahan said.

“I’m excited and ready to go.”