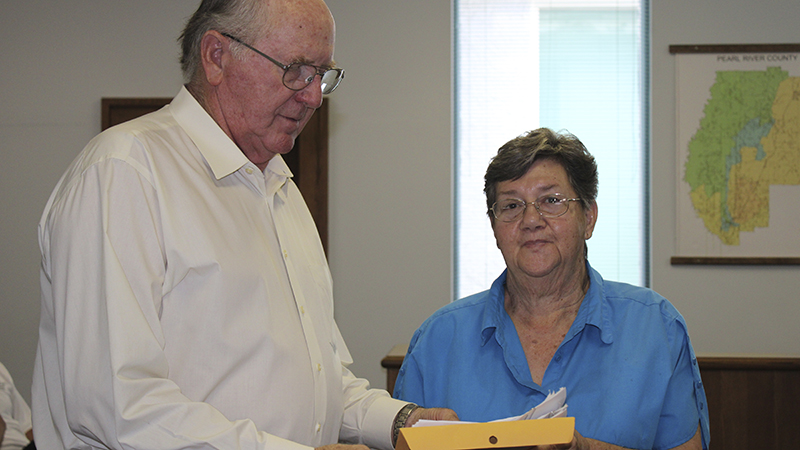 District III Supervisor Hudson Holliday receives a petition to rename the Wolf River Water Park from Judy Ladner at the Board of Supervisors meeting Wednesday. The water park will be renamed Hayward Ladner Memorial Water Park after Ladner’s late husband.

The Board of Supervisors approved the purchase of two 20-foot cargo trailers for $11,240 from Bullons to transport new election equipment during Wednesday’s meeting.

The county’s new election equipment is sensitive and needs to be handled securely, said Circuit Clerk Nance Stokes. The trailers will be delivered 10 days before the primary election set for Aug. 6, Stokes said.

Purchasing one larger trailer would have lengthened the amount of time to pick up and drop off election equipment at precincts across the county, Stokes said. With two trailers, one can be used in the north end while the other is used on the south end of the county. The election equipment will be dropped off at precincts one day before an election and picked up one day after, Stokes said.

Shelving in the trailers can be modified in the future, Stokes said. The county already has vehicles capable of pulling the trailers, said County Administrator Adrain Lumpkin.

In a separate matter, the Board received a petition from Judy Ladner to rename the Wolf River Water Park the Hayward Ladner Memorial Water Park, after her late husband Howard Ladner. Ladner was involved in getting the water park started, said District III Supervisor Hudson Holliday. The Board approved a motion to rename the water park. A new sign will be made for the park.

— Heard a presentation from Traycee Scott Williams about the 2020 census and local government’s role in ensuring everyone gets counted.

— Approved the Pine Grove Volunteer Fire Department’s request to increase their petty cash amount from $3,000 to $5,000.

The next Board meeting will be Monday August 5 at 9 a.m. in the Courthouse on Julia Street.