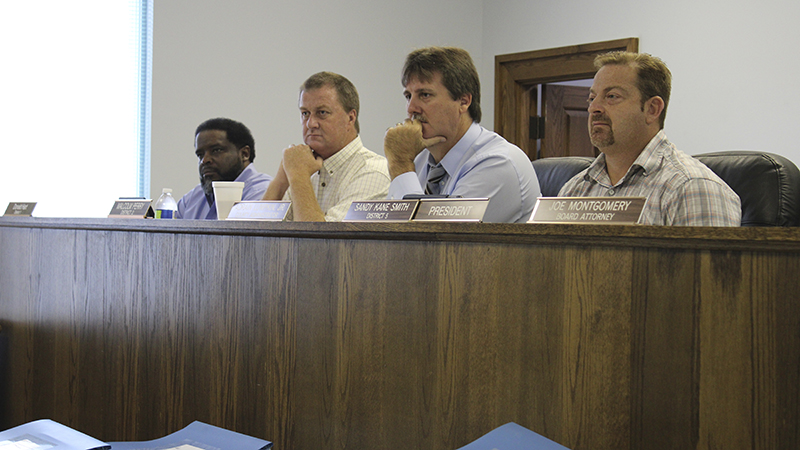 From left to right, Donald Hart, Malcolm Perry, Adrain Lumpkin and Sandy Kane Smith listen to discussion at the Board of Supervisors meeting Wednesday. The Board approved the purchase of two new servers for the county.

The Board of Supervisors approved the purchase of a new computer system, which includes two new servers, for $42,760 from PCM during Wednesday’s meeting.

The purchase was required because one of the county’s servers crashed several weeks ago. The new system will replace the old server, said County Administrator Adrain Lumpkin. The old server stored court system files and managed electronic filing for the Chancery and Circuit Clerk’s offices. It also stored map files, Lumpkin said. All files on the server were recovered because last year the county invested about $20,000 in a backup system called Unitrends.

District III Supervisor Hudson Holliday expressed concerns about the amount of money the county is spending on IT services.

“I knew we were spending money to upgrade the systems, but I thought it was going to be less money than what I keep seeing us spend,” Holliday said. “I was concerned that we really didn’t budget that much money to spend on IT.”

The county is over budget for IT, Lumpkin said, which includes both IT services and equipment purchases.

At Wednesday’s meeting, Holliday asked if the cost of IT services would continue to be higher than budgeted. Holliday said he was not trying to criticize the IT services or service providers, but wanted to know if the county should budget more for IT services in the next fiscal year.

“I’ll be the first to admit, I’m ignorant when it comes to what all that equipment does and how it operates and everything,” Hudson said. “All I know is that I’m a steward of the people’s money and when I start seeing expenditures like that, my job is to ask questions and I did. I don’t know that I got a good answer.”

Lumpkin said the county will see if cuts on IT expenses can be make, but IT services and equipment are necessary.

“In today’s society if your computer doesn’t work, you don’t work,” Lumpkin said. “It’s one of those things you’d like to cut the cost, but sometimes it doesn’t happen that way.”