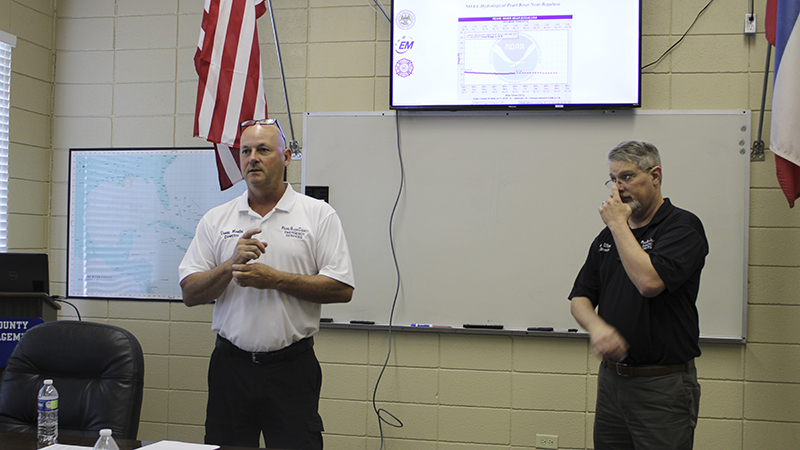 County and city officials are preparing for heavy rainfall in Pearl River County from Tropical Storm Barry from Friday night through Sunday morning.

The storm brings a one in five chance of flooding and a marginal risk for tornados in Pearl River County, said Emergency Management Director Danny Manley during a meeting with county officials and emergency personnel Thursday morning. Currently, the heaviest rain is predicated to fall in the Mississippi River, said Manley.

City of Picayune employees have been cleaning catch basins to ensure they drain efficiently, said Public Works Director Eric Morris. The city has also given out 454 sandbags as of midday Thursday, roughly half of the city’s stockpile of sandbags, Morris said. Sandbags will be available Friday at four satellite locations: behind Pilgrim Bound Church, on Kendrick Lane, at an empty lot on Pinewood Drive and at Mildred Mitchell Park, Morris said. The city provides sand and bags, but residents will have to bring a shovel to bag their own sand.

There were already six car accidents during the rain Wednesday night, said Picayune Chief of Police Bryan Dawsey, and more car accidents are expected to be an issue during the weekend. Dawsey advises drivers to stay off the roads if possible but if driving is necessary, he suggests motorists do so slowly. Picayune Fire Chief Keith Brown said vehicles driving through high water have the potential of creating a wake of water that can create flooding in businesses and homes.

Dr. Eddie Smith with the MSU Extension Service said a lot of rainfall in a short period of time might cause fish to die in flooded ponds. Green algae growth is typical this time of year, Smith said, but if residents see red algae growth in their ponds it is cause for concern because the red algae can kill livestock.

Would be robber thwarted by employee