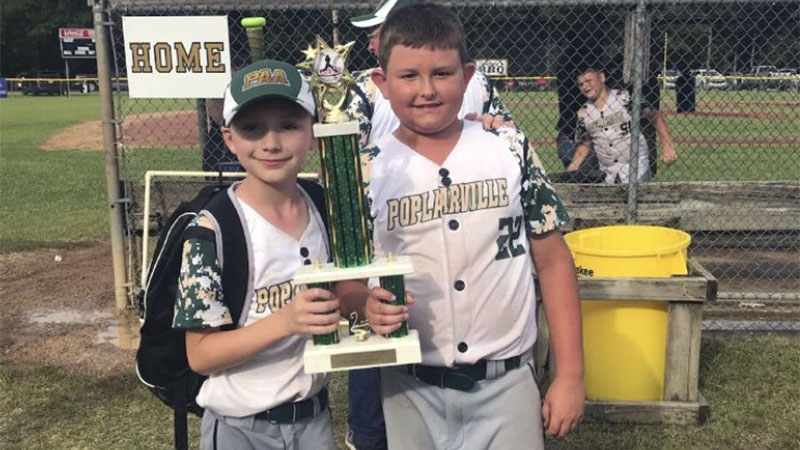 Submitted Photo The best of the best: The 10-U All-star baseball team will be headed to the state championship this weekend to compete for a spot in the Dixie Youth Baseball Division Two World Series.

In just over a year the Poplarville Athletics Association has grown tremendously, even sporting a state bound 10u baseball team.

PAA currently offers baseball, football, and cheerleading for children and the organization is planning to try its luck at hosting a soccer league in the near future.

The organization wasn’t at this exact size when the current board took over, but thanks to a variety of factors the programs have expanded greatly.

The reason for the steady growth can mostly be attributed to community support.

Organization President Mike Sargent Jr. said that without the help of local businesses and others, PAA wouldn’t be where it is today.

“It’s amazing how the park has turned itself around, and how the community has come together with a lot of support,” Sargent said.

In fact, Sargent said that so many businesses wanted to sponsor one of the over 20 baseball teams this past summer that PAA actually had to turn a few sponsors away.

To remedy the problem, the organization started selling signs to sponsors to be placed on the outfield fence, and even had a few field sponsors.

Additionally, the organization has worked hard on improving its relationship with the local high school and college.

That friendliness has led to both schools opening their facilities up to the athletes of PAA.

“They let us play on their fields, and the college opened up their batting cages for us,” Sargent said.

“All of these small gestures make the little fellas think they’re big time.”

The association gives children the opportunity to get out of the house, and Sargent said the family interaction is what makes the events so special.

“The great thing I see with sports and kids is a lot of family involvement,” Sargent said.

“Instead of kids going separate ways, you have families coming together and that’s what the world needs.”

The coaches of the teams also serve as role models for their young athletes and that’s something Sargent really stresses when talking with the mentors.

“This is three months of the year you’re a dad to these kids,” Sargent said.

“You’ll get your blessings later on for helping them now.”

Sargent said the sports also give the children the opportunity to build character and learn how to be responsible.

The athletes represent not only themselves out on the diamond, but also their town and family when they compete in other communities.

Continued growth and improvement of the facilities are just a few of the things Sargent hopes to see in the future, but he has faith that in the end everything will come together.

“Without the community involvement and government help nothing is going to get done,” Sargent said.

“As long as we keep a good name for the park all that will add up and turn out alright.”

Lady Devils golf using offseason to prepare for next…