Board discusses overtime and police department equipment at budget workshop 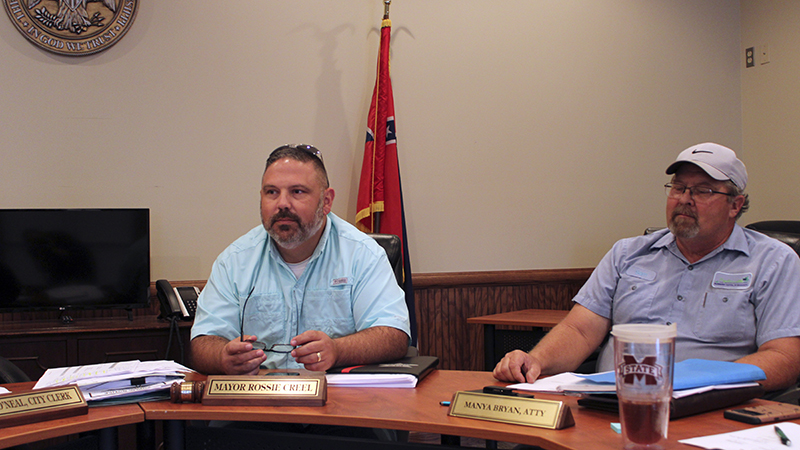 Mayor Rossie Creel and Superintendent of Public Works Sam Hale listen to ideas to reduce overtime in the public works department at Monday’s Budget Workshop. After Monday, expenses in the proposed 2019-2020 budget still needs to be reduced by $5,000. Photo by Cathy Cook.

The Poplarville Board of Aldermen brainstormed ways to reduce the amount of overtime in the upcoming fiscal year for the public works department during a budget workshop held Monday evening.

In the proposed 2019-2020 city budget, expenses still need to be reduced by $5,000, said Mayor Rossie Creel. The majority of the two-hour budget discussion took place before the Board officially started their meeting, because the Board did not have four members for a quorum until an hour and 20 minutes into discussion. Creel said Board members are allowed to discuss city issues outside of an official meeting, but can’t make major decisions without a quorum.

Currently, the proposed budget has $60,000 budgeted for overtime pay in the public works department. Board members suggested changing Superintendent of Public Works Sam Hale from an hourly pay to a salaried pay, so that the amount he is paid would be more predictable. Board members also weighed the pros and cons of hiring an additional employee in the public works department to reduce the workload on current public works employees, but worried an additional employee might increase overtime costs.

In a separate matter, the Board discussed the potential cost for upgrades to the equipment in police vehicles. Potential upgrades could include software that would allow officers to communicate with dispatch, access the National Crime Information Center and write reports in their vehicles, Police Chief Greg Hartley said.

An initial estimate for the cost of the software was $1,700 per car, $4,000 for access to the program and $6,800 for four desk stations at the police department, Hartley said. The city would also need to provide laptops, laptop stands and possibly GPS units, Hartley said. Creel suggested focusing on acquiring the four desk units.

The proposed budget includes $27,640 for police department capital requests, including $1,500 for dash cams and $3,710 for the purchase of two MSWIN radios. The cost of security cameras for the police department buildings and the city’s contribution to the new county central dispatch system were not included in the proposal during Monday’s meeting.

Hartley also proposed take-home police vehicles to the Board. The average round trip for officers from work to home would be 24 miles, Hartley said, and would take roughly a gallon and a half of gas a day.

Board members voiced concerns that a take home vehicle program would be abused, and as such suggested creating clear consequences for misuse of police vehicles.

Board members also agreed that a new sign for city hall, at an estimated cost of $2,000, could be taken out of next year’s proposed budget and instead installed before the end of the current fiscal year in September. Board members agreed to add $1,000 for the Pearl River County Library System in the proposed budget, as requested by Carol Phares, Director of the Pearl River County Library System at the July 16 Board meeting.

The Board will meet July 31 at 5 p.m. to develop a prioritized list of streets to be paved and take action to amend animal control ordinance number 11-15-94 at City Hall.