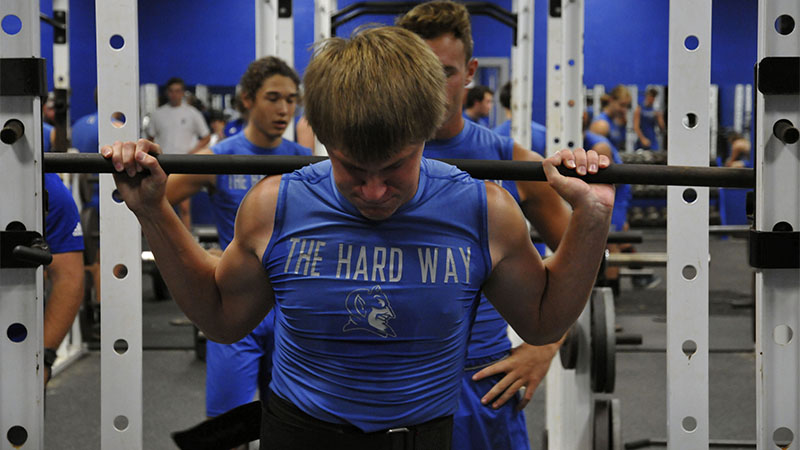 Submitted Photo Hands in the dirt: PRC football looks to improve in coverage on the defensive side of the ball this upcoming season.

The best way to stop an opposing offense in football is arguably a good defense.

However, there are a few set ups that are tried and true when it comes to shutting down specific aspects of an offense.

PRC’s varsity football team has a defensive scheme that focuses on stuffing the run.

The team plays a 5-2 front with man coverage, meaning that on any given play the box is loaded with defensive players.

In theory, having that many players close to the line of scrimmage can trip up an opponent’s running attempt.

Defensive Coordinator Chris Penton said that’s exactly what he and his defense wants.

“For the most part we’ll load the box up and make you beat us through the air,” Penton said.

However, the Blue Devil’s secondary struggled at times last season, preventing the opposing offense from passing the ball efficiently.

“We have to do a good job of using our technique and covering, we gave up too many big plays last year,” Penton said.

“The focal point is pass defense and creating takeaways.”

The necessity of eliminating the big plays is twofold.

Firstly, if the opposing team is able to get a number of big plays, scoring can occur at a rapid pace.

Secondly, it’s demoralizing for a defense to give up those explosive plays.

Team morale is a huge component in football, with momentum shifts happening constantly throughout a game. If a defense can keep the opposing offense contained it can make for a more even keeled atmosphere on the defensive side of the ball.

Additionally, there is an inherent tenacity that has to be present in defensive football players, and Penton knows that he has to find the right guys to play on his side of the ball.

“The thing about defense is it’s its own animal,” Penton said. “You need a certain kind of kid, they need to have a motor and a nose for the football.”

Penton said intensity and effort are paramount on defense because if all 11 players don’t give it their all each play, then the consequence could be a touchdown for the opposing team.

Even still, rough patches can be expected as players adjusted to the new scheme.

“It was our first year running the 5-2, and there were growing pains for the kids learning the system,” Penton said.

“Also, as coaches we have to put guys in positions to be as successful as possible.”

This upcoming season the unit will be returning a number of experienced players, and Penton said he thinks the squad will continue to improve over time.

Penton said the offense did a good job of executing plays last year, and now he’s expecting the same level of production from his defensive players.

“Last year we really relied on offense to play a game of keep away,” Penton said.

“They did a great job later in the year shortening the game for us, and we have to help them out.”

Penton said in order to do this the defense will need to create turnovers to give the offense a shorter field to work with.

Going into the second year of the system means Penton’s players will also better understand the scheme.

Penton said the athletes have already displayed improvement due to buying into the new programs, and because of that he thinks that the coming season will be a good one for the Blue Devil’s defense.