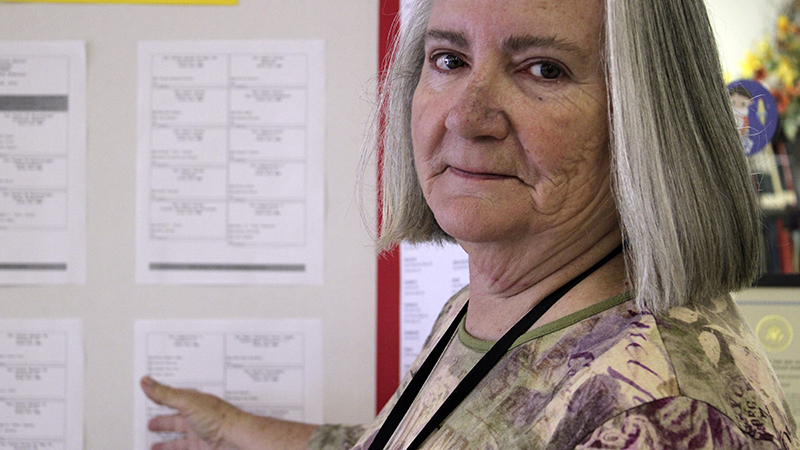 Donna Spiers points to the sample ballot of Republican candidates in a display she put together for the Meet the Candidates event Saturday. Candidates from across the political spectrum will be available to speak with voters.

A Meet the Candidates event will be held at the Margaret Reed Crosby Memorial Library on Saturday and will include at least 56 candidates running for county and state offices.

The event begins at 9 a.m. and a schedule detailing when candidates will speak will be available beginning Wednesday on the Pearl River County Library System website, Holland said. The candidates will also be seated at tables where voters can speak with them and ask questions.

The majority of candidates seeking a county office will be in attendance, Holland said, as well as some candidates for state offices. Friends of the Margaret Reed Crosby Memorial Library are organizing the event.

“We feel very strongly that people need a chance to know the people that they are electing to office, so they’ll feel comfortable once they’re elected communicating with them, and also we think it’s important that people know what the candidates stand for,” Holland said.

The event will also give candidates a chance to hear what community members expect from their elected officials, Holland said.

The event is being held before the primary because in Pearl River County many offices only have candidates from one party running, meaning the primary will determine the winner for that office, Holland said.

The county has new voting machines, so the event will also feature an instructional video from the election commission about how to cast a ballot using the new machines, Holland said.

There will be refreshments available, and the Boy Scouts and Girl Scouts will open the event with a flag ceremony.