Community shows up for candidate meet and greet 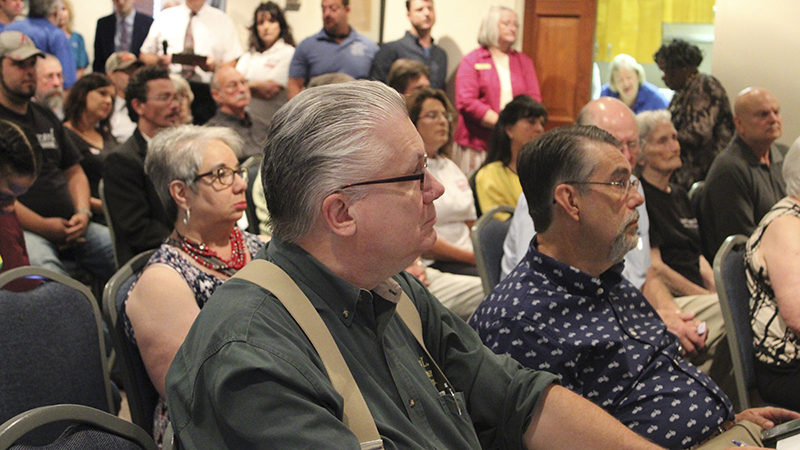 An attentive audience listens to speeches from candidates running for everything from state governor to commissioner of insurance Saturday at the Margaret Reed Crosby Memorial Library. Photo by Cathy Cook.

More than 50 candidates lined the walls of Holland Hall, waiting for their turn to speak, while voters sat in the middle of the room listening to five-minute platform pitches. Candidates appeared to outnumber voters during the meet and greet.

The event offered voters an opportunity to speak directly to candidates.

“You can meet people and judge their character,” said Leilani Herrin.

Herrin was already familiar with most of the Republican candidates as she attends most local Republican events and has worked on multiple Republican campaigns, she said.

“A lot of times you don’t get to put a face with a name,” said Simon.

Rob Davidson recently moved back to Pearl River County, so the event provided a chance to become familiar with local politicians, he said.

“I’ve been attracted to some candidates as they spoke and their views,” said Davidson.

Davidson is most concerned with education, prison reform and seeing new faces in government, he said.

Bradley Duncan said he also wants to see new faces in government. One of Duncan’s top issues this election cycle is voting out elected officials who have held office for a long time, he said. Duncan met three current office holders at the event, he said.

Hal Landrum did not know the meet and greet was taking place, until he saw the library lawn full of political signs, he said. The event helped Landrum decide which candidate to vote for in the gubernatorial race, he said.

Children’s librarian Megan Miller said two teen volunteers helped out at the meet and greet, and the event gave the teenagers an opportunity to learn how the state is run and what government looks like behind the scenes.

Judy McFarland said the event offered her and her husband a chance to meet people in the community. McFarland has lived in the county for eight years, but still works in New Orleans, which makes it hard to keep up with local issues, she said.

“I want to be an informed voter,” McFarland said.

The primary election will be held Tuesday, Aug. 6.