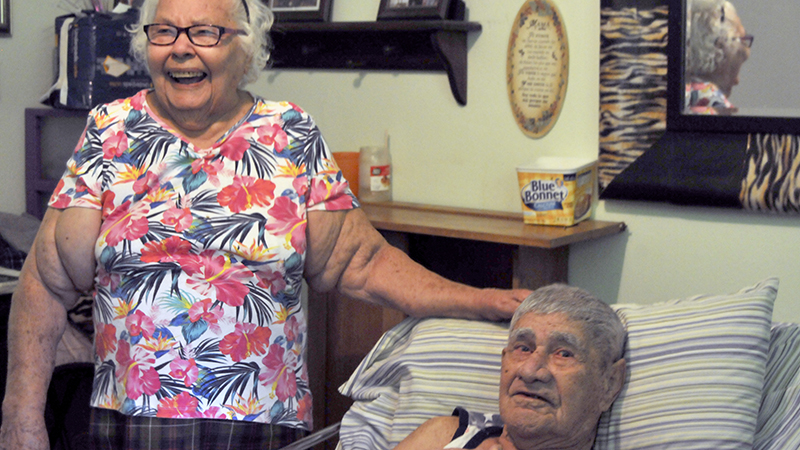 Gloria and Ramon Maldonado have been married for 77 years. Ramon is a WWII veteran about to turn 102 years old.

Ramon Maldonado’s family is preparing to celebrate his 102nd birthday on June 17. Maldonado is a World War II veteran who never talked much about his time in the service, but is very proud of the time he served, said his daughter Bee Trainor.

“He will go fight again if you let him,” Trainor said.

Trainor said she keeps her father dressed in patriotic clothes because he loves to be surrounded by the American flag.

Maldonado served in the US Army from 1944 to 1946, Trainor said. Maldonado served as a cook and rifleman for the Army, according to his separation qualification record. He spent a year in Japan, along with some time in Germany and the Phillipines during his service, said his wife Gloria Maldonado.

Gloria said the couple has been married for 77 years. The pair met at a wake in their neighborhood, Trainor said.

“Mama saw him, and she fell in love with his look,” Trainor said.

The couple raised four kids, of which Trainor is the youngest, she said. Maldonado grew up in Puerto Rico with three brothers and four sisters, Trainor said. In his 60s and 70s, he traveled to different marathons with his younger brother, Trainor said. When Maldonado went for a run, nothing would stop him, Trainor said.

Maldonado began running marathons at 63 after recovering from injuries suffered in a crane accident, Trainor said. The accident happened after he came out of retirement as a heavy equipment operator, during which he suffered a large electrical shock at a job site when he was 62, Trainor said.

“I believe, I swear, that supercharged his heart,” Trainor said.

Trainor said she’s planning a big party with lots of family to celebrate his birthday later this month.

Board of Aldermen discuss routine matters