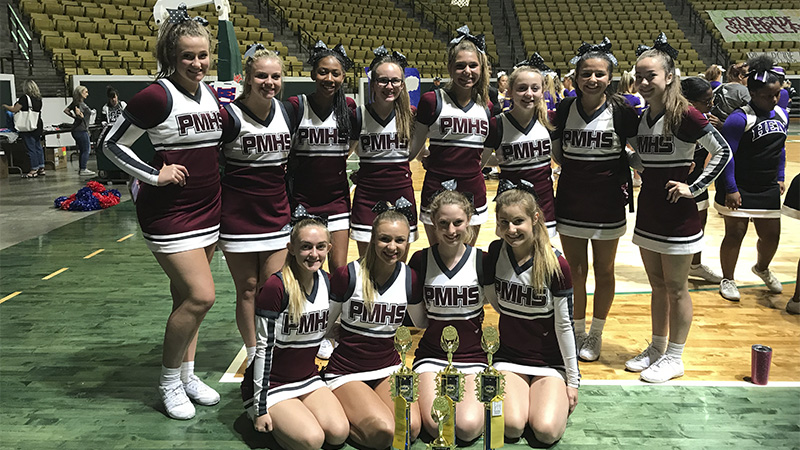 The competition was held from May 28 to 31 and included about 20 cheer squads, all competing for a variety of awards.

The Maroon Tide’s performance found them not only being named Overall Camp Champions, but they also received first place trophies in Camp Cheer and Band Dance competitions while coming in at second place in the Rally Routine.

“It was our first time going to UCA in about 3 years, and it was great for the girls to look at other teams early on in the year so they can grow on their success,” Assistant Coach Allison Riser said.

While the team dominated the competition, there were also plenty of individual awards to go around with 6 members of the squad being named UCA All-Americans.

“The girls really grew as individuals and that camp really made them push themselves,” Riser said.

“We were very proud of all the girls, especially our two senior captains who were named All-Americans.”

The Pin It Forward Award is prestigious, given to a cheerleader who exemplifies great leadership, kindness and motivation. The honor this year belonged to none other than Picayune’s Danielle Weixel.

“The award is given to someone when the staff notices something about you, like showing kindness or great leadership,” Riser said. “The award speaks more about your character than athletic ability.”

The awards were made possible because of the time and effort put in by both the coaches and cheerleaders to perfect their routines.

Riser said that without the long hours, early mornings and busy class schedule, the girls wouldn’t have been able to reach the heights they did.

“It’s really long days usually that start at 8 a.m. and don’t end until around 9 p.m.,” Riser said. “It makes you work hard, you grow as a team not only competition wise, but also as a group.”

According to Riser, the varsity squad will rest during the summer until the start of the next school year when practices start up again usually the week before school starts.

“The competition really sets the tone for the rest of the year and we have a lot of material we can use at games or even at other competitions,” Riser said.

Riser said the coaches and cheerleaders will sit back and enjoy the beginning of the summer knowing they’re champions and that they deserved all of the accolades they received.

“We are very proud of what the girls accomplished, and seeing them grow as a team and as individuals,” Riser said.