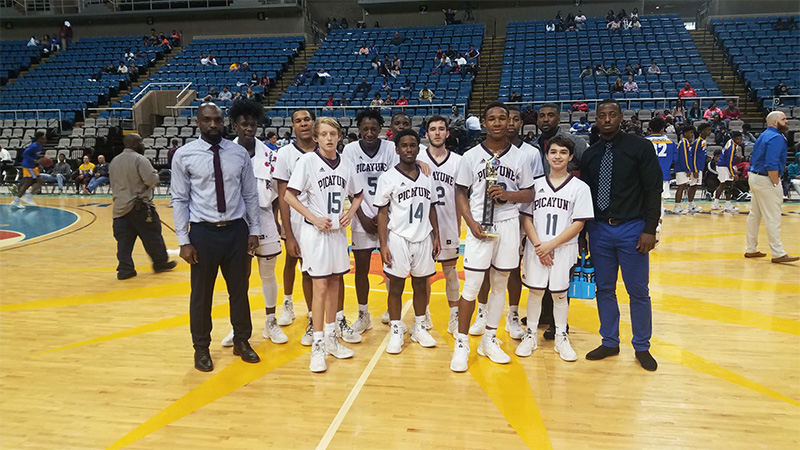 Submitted Photo We are the champions: Head Coach Eric Vianney, his staff, and the team pose with their trophy after beating D’Iberville at 2019 Hoopfest.

The boy’s varsity basketball team started the season 0-3, a beginning that could rattle a team and send it off course.

Instead, Head Coach Eric Vianney and his guys were able to turn the season around and end the season with a 20-12 record.

Vianney kept his team on the right track, and the guys figured out how to win close games that they had lost early in the season.

“It was a hard period, but it was nothing to panic about and we tried to stay the course and do the things we needed to do,” Vianney said. “The great thing was we continued to improve and later on the team figured itself out.”

Last season was Vianney’s first as head coach, so he knew he had a lot of work ahead of him to figure out what kind of team he had.

“Early in the season I think the guys were working hard, and they started buying into what we were selling.”

The team didn’t have much depth, with Vianney saying they only played five to six guys each game.

However, those athletes put in the time necessary to be successful, and that tenacity was something Vianney appreciated.

“Credit to those guys; they came to work every day and battled every day,” Vianney said. “And we had a little run there at the end.”

With a young, inexperienced team, Vianney and his players leaned on senior Marvun Arnold to get out of tough situations.

“He was our guy,” Vianney said. “He was our best player and a very smart player, very skilled player.”

This year Vianney has been reiterating to his team that they won’t have Arnold to act as an insurance policy to get them a bucket when needed.

Instead, the players will have to work as a group to overcome obstacles in their way, and learn how to play consistently as a team.

“Right now I would say that this summer we’re trying to figure out who is stepping up, but it’s been a struggle,” Vianney said. “We’re not consistent, and we don’t compete all the time.”

Vianney is trying to get his young players to be steadier during games, and get their skills where they need to be.

“The nucleus of the team is different, we don’t have that dominant point guard,” Vianney said.

Finding the leader of the team and becoming more consistent is what Vianney is striving for. He says that each player’s ability to get those things nailed down will affect how the team performs next season.

“We’re trying to get our guys to compete, to want to win,” Vianney said.

“Some of our guys know what it is; we just lack that ability to do that every possession and that’s what we have to figure out.”