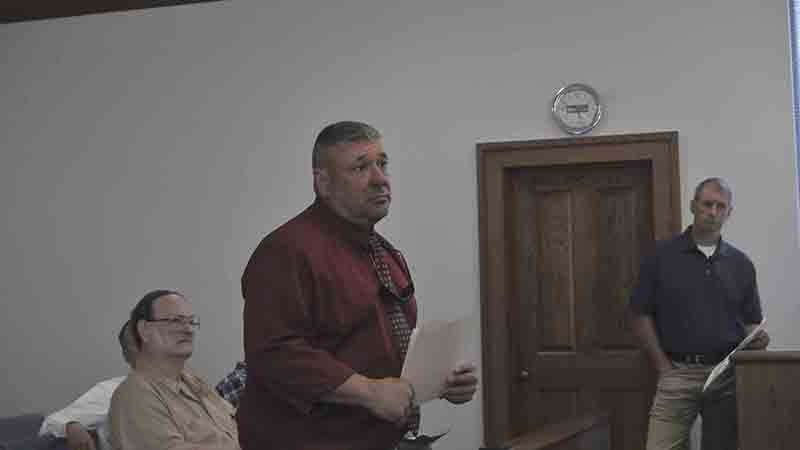 Pearl River County Hospital and Nursing Home CEO James Williams speaks to the Board of Supervisors at Monday's meeting.

His request is based on the hospital being required to pay the Centers for Medicare and Medicaid Services $5.9 million due to unethical money management by previous hospital administrators in 2011, Williams said.

The hospital has paid that debt down to $3.2 million, Williams said. Currently the debt with CMS entails a 10.75 percent interest rate, Williams said. This means CMS withholds an average of a $120,000 total monthly payment from of Medicare reimbursements from the hospital, Williams said. Williams asked the Board of Supervisors to borrow money at a lower interest rate to pay off the remaining debt.

County Administrator Adrain Lumpkin said he believed the Board could find a loan to repay CMS that would have a 4.5 percent interest rate. Lumpkin said interest on a loan from the county would be eligible for reimbursement from Medicaid. The hospital cannot get reimbursed for the interest on the current loan payments, because they are being made to Medicaid, Lumpkin said.

The hospital’s revenue dropped from $20 million in 2016 to $17 million in 2017, but is expected to increase by 6 percent above 2016’s revenue in the current fiscal year, Williams said.

Williams said he plans to add additional services at the hospital to increase the hospital’s revenue, such as an MRI machine and an Intensive Outpatient Therapy unit for behavioral health or mental health.

After continued discussion, the Board passed a motion to advertise for quotes for the loan.

In a separate matter, Williams said that the hospital’s plumbing and air conditioning systems are functional, contrary to rumors on Facebook Board members Holliday and Board President Sandy Kane Smith saw.

— Rescinded the bid for $22,000 to modify the intersection of McCastile Road and McNeill Steephollow Road to accommodate the turning radius of 18-wheeler trucks that was awarded to Hensley R. Lee Contracting on May 23. The Board wanted more time to think about lower cost modifications that could be done to the intersection, Smith said.

— The Board awarded a bid for $756,000 to Huey P. Stockstill for the County Wide Overlay 2019 Project. The project was originally projected to cost $1.4 million but two of the roads in the original project will be repaired by county crews, Lumpkin said. The three roads still in the project are Cesar Road, Burgetown Road and Liberty Road, county engineer Les Dungan said.

— The Board awarded a bid for $7,800 to Southern Exteriors to provide fencing for the walking track in the Salem community.