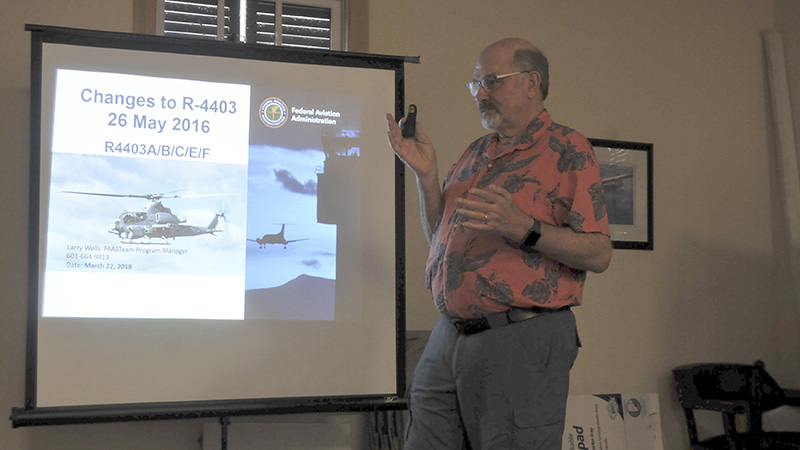 Restricted airspace 4403 was expanded in 2016 and contains five sectors, said Karma Snyder, NASA’s range safety manager. The Navy uses three sectors—C, E, and F—for tests, while the other two—A and B—are utilized by NASA, said Snyder. NASA and the Navy will not use the airspace at the same time. The restriction of the airspace is typically only activated once every couple of months, so pilots may forget, said Snyder.

When the airspace is going to be used for testing, a Notice to Airmen, or NOTAM, will be filed with the FAA at least 24 hours before the airspace becomes active, Snyder said. NASA and the FAA presented information on the restricted airspace because they want to keep the general aviation public safe, Snyder said.

The Navy uses the airspace to test Blackjack Unmanned Aerial Vehicles, otherwise known as drones, Snyder said. Unlike a pilot who can look around and spot other aircraft easily, UAVs use mounted cameras and by the time that camera rotates it could be too late to avoid a collision with another aircraft, Snyder said.

There is a one mile safety zone around the inside edge of the restricted airspace as an extra safety precaution, said Jason Peterson, NASA’s range and aviation operations manger.

In the future, the Navy plans to test AC-130 gunship lasers, which could cause eye injuries in the restricted airspace, said FAA representative Larry Wells.

Pilots who are coming in tight near the airspace and are worried they may violate the airspace when it is active should call Stennis Tower or contact Snyder, said FAA representative Scott Lynn. In an emergency, Snyder may be able to stop tests and let pilots into the airspace, Wells said. Wells reminded pilots that it is their responsibility to always check NOTAMs before a flight.

During a big event that would draw in a lot of air traffic, NASA and the Navy are not allowed to activate the restricted the airspace, said Wells. The airspace will be more active in September, said Peterson.