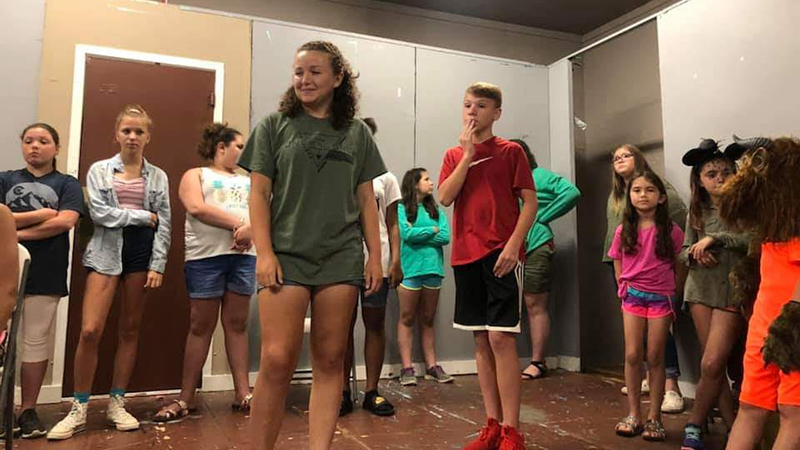 Submitted Photo. Children rehearse “Who’s Afraid of the Big Bad Prince?” at the Picayune on Stage rehearsal studio in preparation for their performances Friday, Saturday and Sunday. The play follows a modern day Cinderella who’s Prince Charming has lost his charm.

A young cast will perform “Who’s Afraid of the Big Bad Prince?” Friday, Saturday and Sunday at Roseland Park Elementary School, alongside an original skit written by co-director Jamie McDonald.

The production includes 27 children who range in age from five to 17, said co-director Donna Aguilard. Picayune on Stage has held a children’s play every summer since the organization got a rehearsal studio, Aguilard said.

“The last couple of years it has proven to be a great show and this year I don’t think the kids are going to disappoint,” Aguilard said. “They perform just as though they were professionals.”

Actors in the play rehearsed for six weeks and no one who wanted to be a part of the production was turned away, Aguilard said. McDonald wrote the additional skit, “The Princess and the Internet,” so that every child could have at least a small speaking part in the production, Aguilard said.

The feature production offers a modern day twist on a classic fairytale about a distraught Cinderella who’s Prince Charming has lost his charm—and the prince’s new cellphone may play a role in that loss, Aguilard said.

While both the main play and the skit focus on technology, the thematic alignment was not an intentional choice, Aguilard said. During last year’s play, which included a wicked witch, a boy requested to be in a play that included a male villain, Aguilard said, which led her to this show.

“They’ve worked extremely hard to entertain and they deserve an audience that will appreciate them,” Aguilard said.

Tickets are $10 for adults and $5 for students. Friday and Saturday’s performances will be at 7 p.m. with a Sunday matinee at 2 p.m. in Roseland Park Elementary School’s Multipurpose Building.

Stuart given 20 years for killing his brother