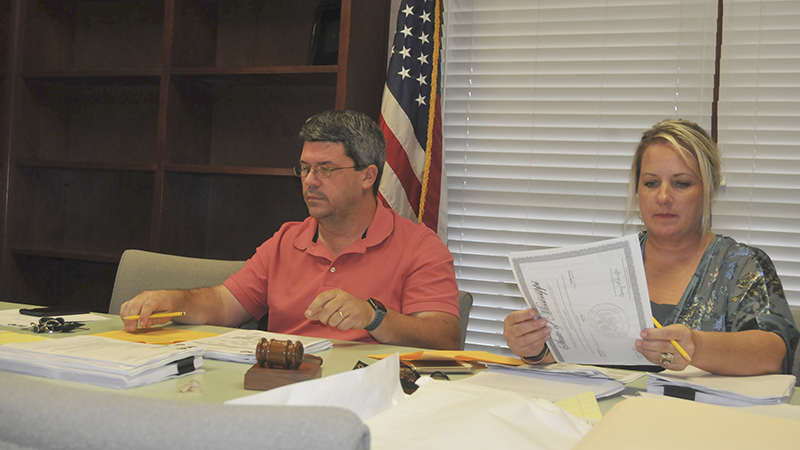 Board President Tommy Strahan and Board member Lisa Graves review paperwork at Monday's Poplarville School Board of Trustees meeting.

Other schools in Mississippi competed for the grant, Superintendent Carl Merritt said. Receiving the grant is a great honor for the school, Merritt said, and the funds will go toward adding to or replacing playground equipment at the school.

With the grant officially accepted by the Board, the school can move forward with buying the new playground equipment, Merritt said.

— Approved the insurance proposal by Insurance and Risk Management for the upcoming fiscal year. The proposal includes an $8,000 increase from the previous year due to an additional building being accepted by the District from the county and due to insurance rates increasing in the six coastal counties.

— Approved an amendment to the 2018 Consolidated Federal Programs Application, which gave the District funds that other school districts in the state did not spend, which will be put toward paying for a social worker for the next school year and toward the District’s data system.

— Heard an update concerning the Middle School of Poplarville’s plans for tutoring SPED students in the upcoming school year, which includes grouping students in the bottom percentile based on tutoring needs rather than grade level.

— Heard that the budget hearing for the next fiscal year is set June 24 at 5 p.m. in the Board room.

The next School Board meeting will be held Monday, July 8 at 6 p.m. in the Central Office on Julia Street.