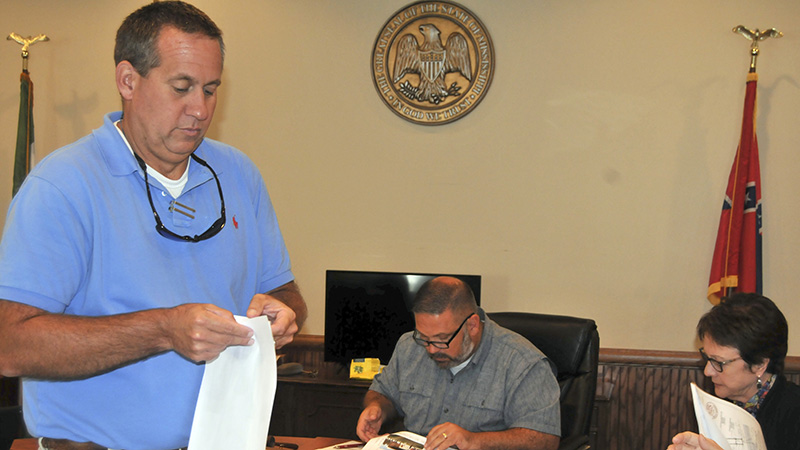 Jason Lamb hands out concept images of a park stage at the Poplarville Board of Aldermen meeting Tuesday.

The Board of Aldermen authorized city attorney Manya Bryan to secure right of way warranty deeds needed to proceed with the drainage project on Martin Luther King, Jr. Drive during Tuesday’s meeting.

Poplarville resident Marie Bowden voiced her concern and frustration with the drainage issues in the city during that meeting. Bowden said she believes that Martin Luther King Junior Drive and Woodard Street are the main areas that need to be fixed. Bowden also said that in her 30 years in the city the drainage issues on Martin Luther King Junior Drive have not been fixed; she’s only seen patchwork be conducted. After the Board passed out maps outlining the scope of work, Bowden reviewed the map, expressed her displeasure that the current drainage project does not remedy the flooding that occurs on her property during storm events, and abruptly left the meeting in frustration.

The Board is prioritizing the repair of drainage issues over asphalt and paving in the 2019 Road and Bridge Bond Program. Alderman Russell Miller said that addressing the drainage problems will be conducted first because a good base is needed to effectively repair streets.

The Board rejected bids previously submitted for asphalt and paving and plans to advertise for new paving bids in the fall. The Board did not want to commit the $991,958 required for the lower asphalt bid without first finding out how much funding will be needed for the drainage improvements. The project will be funded by a bond that will be repaid from fuel diversion taxes.

Mayor Rossie Creel said the cost to repair the drainage issues could cost as much as $400,000 in addition to the costs of engineering and attorney fees. Those expenses will cut into the available funding for paving streets.

As a result, the Board may need to reduce the scope of the asphalt paving, said Jason Lamb with Walker Associates. Lamb said he would be uncomfortable looking for new asphalt and paving bids with the 36 roads currently included in the project. Lamb, said the Board already cut the two alternates.

The Board authorized advertising for bids for drainage improvements in May and is still waiting for those bids.

In other business, the Board discussed the change in Mississippi Department of Transportation policy that no longer allows doublewide mobile home transportation on Highway 26 through Poplarville. That change was made after MDOT received a complaint about damaged mailboxes. Alderwoman Anne Smith said she wanted to make it clear to the public that the change came from MDOT and not from the city of Poplarville.

The Board went into executive session to discuss potential litigation and personnel matters within the public works department. No motions were made when the Board returned to open session concerning the matters discussed in executive session.

Previously this story incorrectly stated that Bowden left the meeting because her street was not being fixed in the drainage project, when she actually left because the drainage project would not remedy the flooding that occurs on her property. The story has been updated to correct that inaccuracy.

Board of Supervisors approve funding for county jail server