Camaraderie and competition at the Senior Games 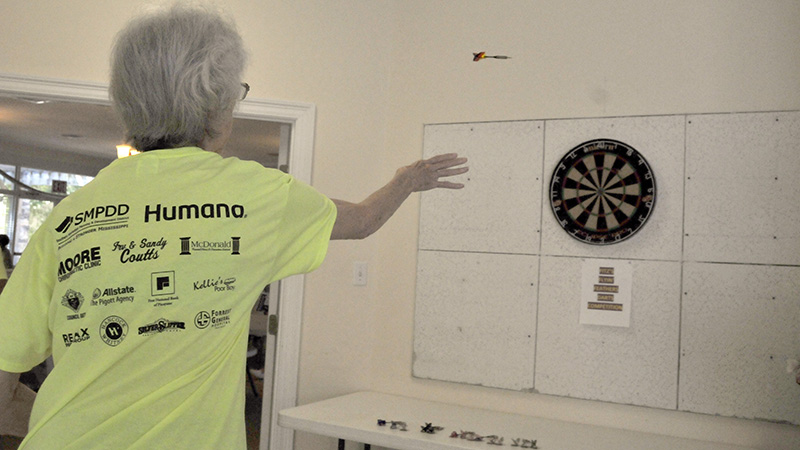 Carolyn Maronge throws darts in the finals of the dart throwing competition at the Senior Games Friday morning. Maronge placed third in that event.

The games had a good turnout with around 50 participants, said participation coordinator Kathleen Penton.

Thursday, two teams sat in lines inside the Senior Center and cheered on their teammates as they participated in bean-bag baseball.

The game was popular among participants, but not the only game that utilized hand-eye coordination. Competitions also included corn hole, Wii bowling, archery, darts, horseshoes, a one-mile walk and a fifth of a mile sprint.

Archery was first time competitor James Knight’s favorite game, he said. Knight said it has been a long time since he last used a bow, so it was great to have the feeling again.

Some participants like Carolyn Maronge were well versed in the games they competed. Maronge, who took third in the darts competition, said she plays darts everyday, and that it was fun to mix and mingle with other people during the competition.

The event also gave participants a chance to try their hand at games they have not played before, like Jane Blanks who said she does not normally play Wii bowling, but she competed in the event Friday where players used a controller to simulate rolling a ball down a lane to knock down virtual pins.

Lenora Jefferson said she’s played Wii bowling before and enjoyed it, but this year she chose to just spectate that event. Still, Jefferson said, watching the competition was entertaining and she loves the Senior Games.

The games also gave participants an opportunity to meet new people. Returning competitor Katrina Smith said there were a lot of new faces at this year’s event. The games gave Knight a chance to meet people from different walks of life, he said.

First time participant Susan Blake lost her husband earlier this year and said the games gave her an opportunity to make friends and engage in the camaraderie, she said.

Johnnie Mae Cooley is a familiar face at the center—she’s been a regular since it opened, she said. The games have improved over time, Cooley said, and she’s grateful to participate in them.

Summer fun at the Crosby Arboretum