Battle tested and ready for another baseball state championship 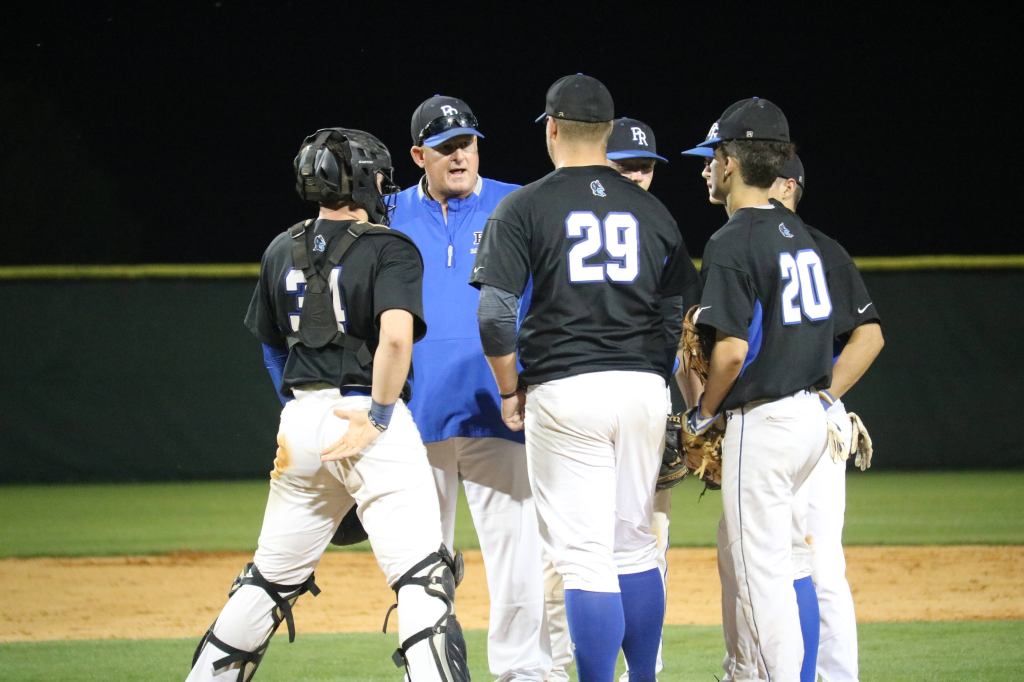 Photo by PRC Athletics Meeting on the mound: Coach Neil Walther gathers his players at the mound. during previous action. Stoppages like this occur in order to change defensive strategies or calm a pitcher during a rough stretch.

However, last year expectations waned slightly with the squad being incredibly young, having only 5 seniors on the team.

That didn’t stop the young team from storming through the season and making it to the third round of the playoffs.

“We had a lot of guys who came in with not a lot of experience,” Head Coach Neil Walther said.

“So I’m not sure how many people expected us to win as much and play as well as we did.”

Walther, attributed the expectation-shattering season to the ability of his young players stepping up and plugging holes in the lineup.

“A lot of it is that we had some really good players who weren’t known because they’d been playing behind guys the year before,” Walther said.

“Just because they’re young doesn’t mean they can’t play. I think they snuck up on people. We had talented kids who just couldn’t get on the field last year.”

The youthful team was able to come together as the year went on and really perform to the utmost of their abilities.

“We played great as a team and had some great individual performances,” Walther said.

“At one point in the playoffs in one of the games we were starting an eighth grader, two freshmen, and three sophomores. One of my assistant coaches looked over to me and said ‘Look at that, look at how young we are.’”

“But those guys, they’re used to winning a lot of baseball games and had a lot of confidence.”

A young team means that the players need to adapt to the quicker pace of play in high school baseball.

“The biggest thing we had was that there was a big learning curve,” Walther said.

“The game moves so much faster and some of the guys were just thrown into it. Mistakes were made earlier in the year that weren’t made later.”

Walther said the reason for the gradual improvement was due to leadership of the squad’s seniors.

“It helped that we had five seniors who helped the kids along. That was what I was most proud of, not the success that they had, but I imagine most teams, if a young guy were on the field and a senior wasn’t, that there would be issues. That didn’t happen once on our team.”

Walther says whatever it takes to win the game is all that matters for these athletes, and their behavior on and off the field shows that.

“I think we have a lot of team first guys and it makes it enjoyable to be around,” Walther said.

“And it helps that it’s a tight knit group. Not only are they teammates, but they’re friends too.”

Having so much success in recent years has led to a certain amount of expectation born out of desire to win, but also respect for competition.

“Our first goal is just to get in the playoffs,” Walther said.

“It’s the best 5A district in the state hands down and any team can win it.”

That fact rings true considering Hattiesburg, the 2018 champions, didn’t even make it into the playoffs this past season.

Coach Walther knows making the playoffs this coming season won’t be an easy task, especially with the amount of talent he’s going to have to replace.

“We have to replace our catcher who is now going to play at Ole Miss,” Walther said.

“We also have to replace our number one pitcher and two outfielders who are leaving, so someone has got to fill those shoes. It’ll be a young team again, but I don’t think that really matters.”

Coach Walther credits a large part of the success of these young players to his coaching staff, who have been an asset to the program during these successful seasons.

He said that hitting coaches Ashley Graeter and Cayne Stockstill were key, as well as Bob Dunhurst and Colby Hawthorne contributing as well.

“The assistant coaches do a great job,” Walther said.

“There is never a time when those guys are standing around and they do a great job. There aren’t any egos on the coaching staff, and everybody jumps in and helps.”

Coach Walther says his players have their workout plans for the summer, and that he’ll find out in August what his guys are made of for the upcoming season.

Volleyball’s inaugural season will be one to remember