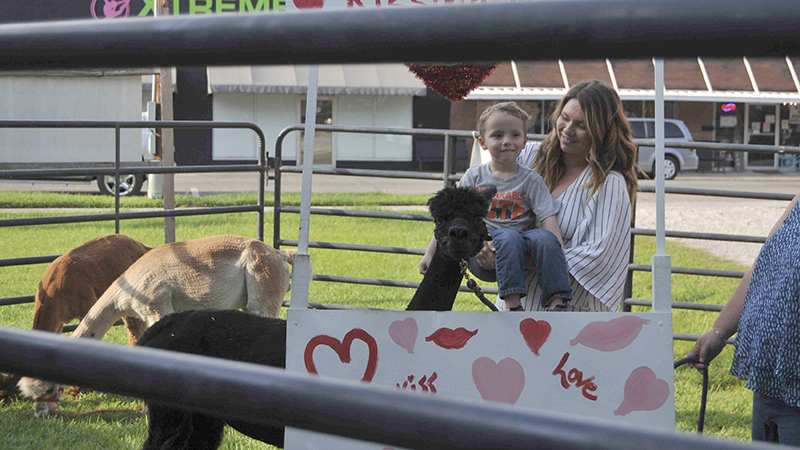 Local business owner Meghan Pomes and her son Elijah Pomes meet an alpaca in the alpaca-kissing booth Friday. The kissing booth was a promotion to bring customers to local businesses in Picayune’s downtown area.

An alpaca kissing booth took over the yard in front of vintage store Memory Lane Friday night in an effort to promote “Alive After Five.”

Six weeks ago, 16 local businesses along West Canal Street committed to staying open for longer hours each Friday night in an effort to bring in more local customers, said Ice Pumilia, head of the Main Street merchant promotions committee. Ice is hopeful that more businesses will join the initiative, she said.

To draw attention to the businesses, Alive After Five will hold promotional events all summer such as Friday’s alpaca kissing booth, where people could pay to pet and kiss alpacas, Pumilia said.

Since the effort began, Pumilia said she’s seen a steady increase in business because people in the community realize which stores exist in the historic downtown area.

Meghan Pomes, owner of Madeli’s Waxing and Esthetics, said staying open later has led to a small challenge for her business, but the later hours have pulled in extra customers who work during the day.

Kevin Sizemore, owner of The CBD Junction, said his business opened around the time the initiative started and he geared his hours to stay open until 7 p.m. all week. Customers appreciate those later hours, he said.

Sharon and Quinn Kelly came to see the alpacas Friday night. Sharon Kelly said she thinks the later hours are a great idea to get people to spend money in local stores.

“We didn’t realize they were doing it,” Kelly said. “Now we know we will probably come more.”

Erica Kuhns, who runs Heavenly Grace Farm, provided Friday’s alpaca encounters. She said she did not realize how many stores were located on West Canal.

“I think once word gets out, people will know you can stay here in Picayune. You don’t have to go to Slidell,” Pumilia said.