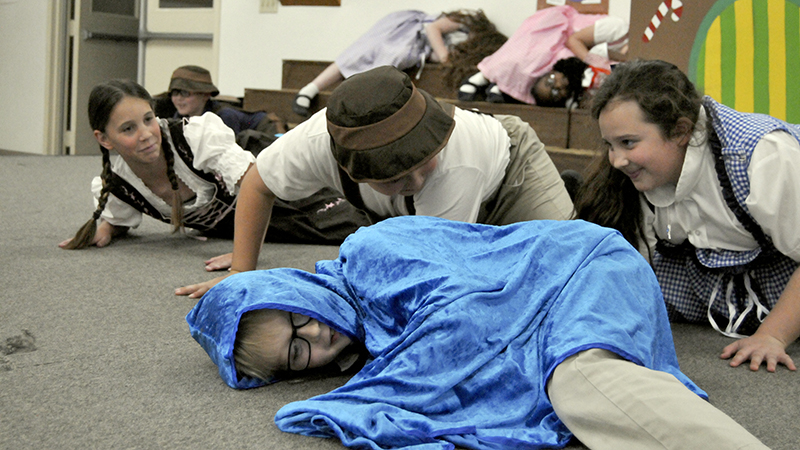 PRACTICE MAKES PERFECT: Students rehearse falling down in a storm for their production of Hansel and Gretel. The play will run Friday and Saturday night. Photo by Cathy Cook

Witches, and candy, and ovens, oh my! Third through sixth grade students at St. Charles Borromeo Catholic School are performing the play “Hansel and Gretel” this weekend.

The first performance is Friday, May 17 at 6 p.m. and the second performance will be Saturday, May 18 at 6 p.m. Tickets are $5 general admission and $3 for other students of the school.

Both performances will be held in the St. Charles Borromeo Catholic Church Parish Hall.

Gina Rancatore is a senior in college who is donating her time to direct the show. She spends two afternoons a week preparing the cast for their upcoming performance.

Rancatore said the students take the script as a base, and perform the characters from whatever angle they like. The students built their own backstories and helped design sets and costumes to teach them different parts of putting on a production, Rancatore said. She said she learned to sew so she could create some of the production’s costumes, she said.

“I know when they’re involved in the process, they appreciate it more and want to throw everything they have into it,” Rancatore said.

The show stars, 12-year old Averie Tolar, who plays Gretel, and 10-year old Alexander Valverde, who plays Hansel. They said memorizing lines has been the hardest part of the process. Rancatore taught the kids to become their character when they step onto the stage, Valverde said.

Eleven-year-old Melanie Champagne said the production taught her how to project her voice during a performance. Champagne said she has ambitions to be a professional actress, and was surprised to be cast as the play’s villain: the witch. But she has embraced her role and become friends with the two boys who play her henchmen Frik and Frak, she said.

The cast ranges from children aged 8 to 13, which made it challenging to help every student feel like they had a place in the show, Rancatore said. She was once a student at the school, and as such decided to share her passion for theater with the current generation of students at St. Charles.