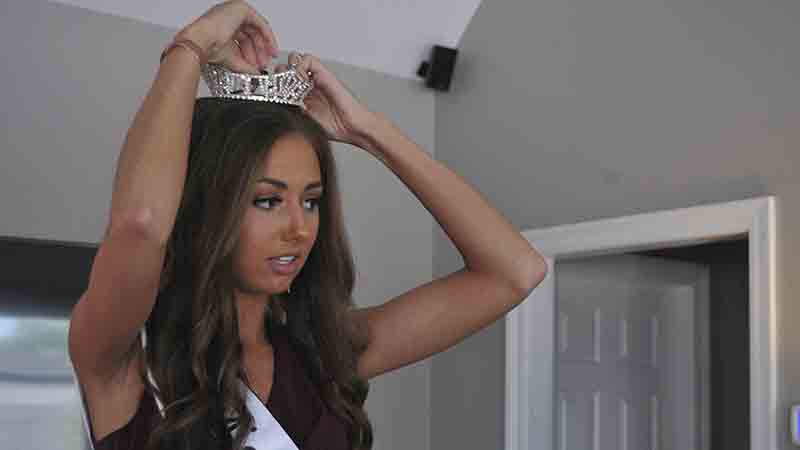 Miss PRCC Jessie Besanson adjusts her crown. Besanson will represent PRC at the Miss Mississippi Pageant from June 19 to 20.

She’s doing this preparation because pageant contestants are not only expected to perform a talent, stay fit and wear stylish dresses—they are also given 20 seconds to answer questions on current events, Besanson said.

Besanson has also prepared a jazz dance routine, which was choreographed by her long time dance coach Kara Fleming, she said.

The Miss Mississippi Pageant is part of the Miss America Pageant and rewards winners and competitors with scholarships, Besanson said.

The current Miss PRCC won her crown in November of 2018 in her second pageant ever and since then Besanson has been upholding the service role expected of pageant winners, she said.

Pageant winners choose a platform to champion, and Besanson chose women’s health because her mother was diagnosed with breast cancer in 2017, she said. Her mother’s cancer was caught extremely early, allowing for an effective treatment, Besanson said.

Besanson is also in a premed program at Mississippi State University and plans to become an OBGYN, she said.

In support of her platform, Besanson moderated a panel at the Picayune Women’s Health Symposium in January and spoke at a suicide awareness benefit concert held by Pearl River Community College, she said. Miss PRCC is also responsible for reading to students at schools and raising money for the Children’s Miracle Network, she said.

Besanson said winning the Miss Mississippi Pageant would be a dream come true, because it would let her represent Mississippi at the Miss America Pageant.

“I would get to be a bigger role model for young girls and spread my voice even more on women’s health,” Besanson said.

The Miss Mississippi Pageant takes place in Vicksburg from June 19 to 20.

This story has been updated to correct inaccuracies.