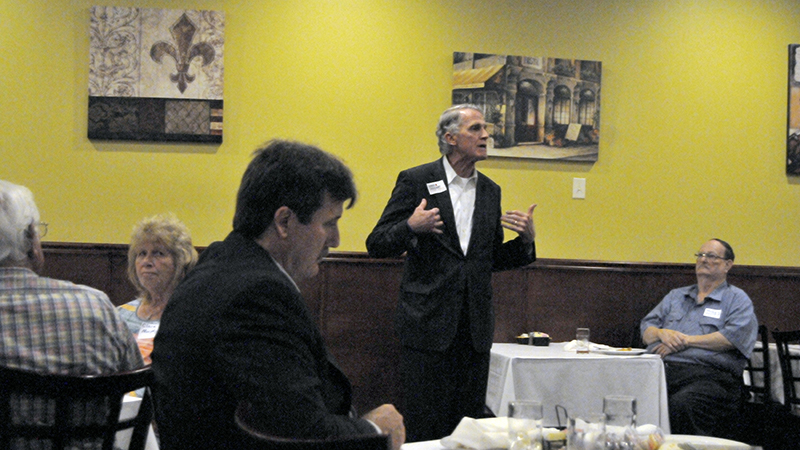 This story has been corrected to correct the name of one of the candidates, Andy Taggart.

Locals had a chance to meet with Republican candidates Andy Taggart and Robert Foster Thursday night at Southern Char.

Taggart is one of four candidates running for attorney general; three are Republicans and one is a Democrat.

Taggart said his platform is focused on drug use.

“Drugs are eating away at the fabric of our society,” Taggart said.

Taggart emphasized his experience as a courtroom lawyer, and his legal work for Phil Bryant when he served as State Auditor and former Republican Gov. Haley Barbour.

He said he was thrilled to be at the event and believes Pearl River County is the center and heartbeat of Mississippi.

Foster is one of 12 candidates in the race for Mississippi’s Governor. Three are Republicans and nine are Democrats on the ballot for that office. Foster is currently serving a term in the Mississippi House of Representatives.

Foster wants to repeal personal income tax, introduce more technical training in high schools and he said he believes the state struggles economically because of its tax structure.

Foster said he wants kids to have the opportunity to learn skills instead of taking a test. He said college is not the right path for all kids and that young people are not learning how to do anything of value in schools, so he wants to reintroduce more technical training in schools.

Foster claimed he helped author Mississippi’s recently passed heartbeat bill, which bans abortion once a fetal heartbeat can be detected, and that legislators in the senate stole the language from him.

Foster said he is running for governor after only one state senate term because he believes if he waited, he would be drained of the passion to fix problems in government.

Foster said he “will put God first in everything he does.”

Attendees said they were pleased with the opportunity to meet candidates.

“It was great. I liked what both men had to say,” Alano Campo said.

Mike Patten, who is running for county prosecutor, said it was interesting to meet both state and local candidates.

Jansen Owen, who is running for state representative, said he believed both candidates had a positive vision.

The voter registration deadline for 2019 primary is July 8.