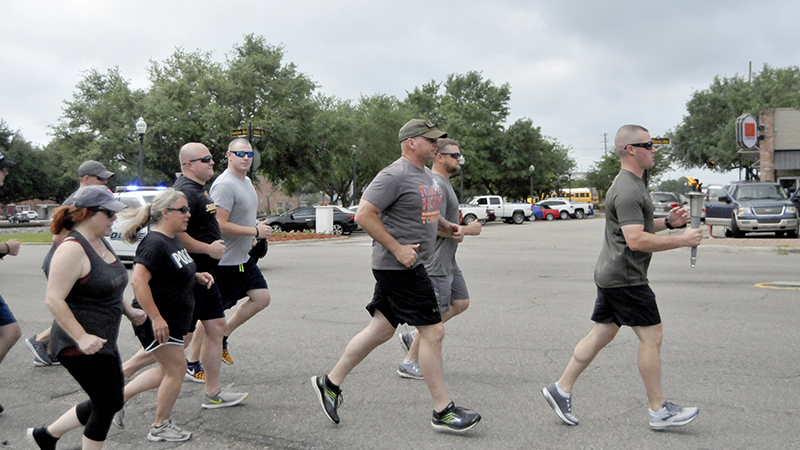 FLAME OF HOPE: Law enforcement officers begin their run at the intersection of Goodyear Boulevard and Main Street. Photo by Cathy Cook

Members of the Picayune Police Department and the Pearl River County Sheriff’s Department participated in the Law Enforcement Torch Run Thursday morning as part of a statewide effort to raise funds and awareness for the Special Olympics.

The annual run typically raises $40,000 to $50,000 statewide said Major Chris De Back of the Biloxi Police Department. The funds raised pay for medals, and helps send athletes to camps, said Vickie Lee of the Biloxi PD. According to the Mississippi Special Olympics website, the Law Enforcement Torch Run is the largest grassroots fundraiser in support of the Special Olympics.

On May 10, a run at Keesler Air Force Base opens the state summer games, which take place from May 10 to May 12, Lee said.

“We interact with them and show our support,” said Chief Deputy Shane Tucker with the Pearl River County Sheriff’s Department.

Tucker said he’s been participating in the run since he began working in Pearl River County in 2008.

“I love when our agencies come together to do something positive for our community and this is a great cause,” said Rhonda Johnson, an investigator with the Picayune Police Department.

Vickie Lee and Steve Rocha of the Biloxi PD brought the torch, which was lit during the run.

Council hears pitch to reduce speed limits in some…