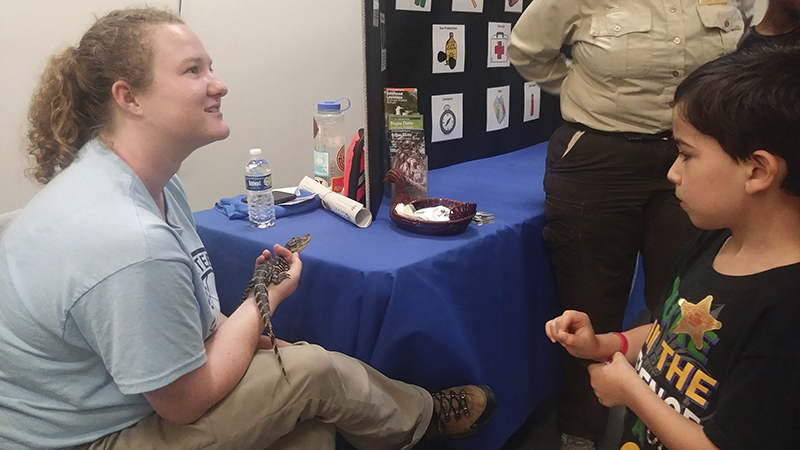 Kids had an opportunity to meet police officers and firefighters and see a police car and fire engine up close.

Diane Barth, a park ranger with the National Wildlife Refuge, was there teaching people safety tips that can be useful while in the wilderness.

Barth said people should never approach an alligator in the wild. She followed that advice up with the fact that alligators that have not been fed by humans will naturally fear them and not be aggressive, so it is important to avoid feeding wild animals.

Emergency department employee Rikki Lang reminded kids that sunscreen use can prevent skin cancer, while her coworker Jordan Fontenelle demonstrated how to use a fire extinguisher. The three steps are pull the pin, aim with the nozzle and squeeze the handle, he said.

Michelle Jones from the Picayune Eye Clinic offered vision screenings and taught kids the importance of eye exams. Most kids were grossed out by the model eyeball on her table, Jones said, but people were excited about free sunglasses.

Jennifer Spence, a local high school science teacher, said the safety fair gave her students a great opportunity to be involved in educating the community.

Debony Richardson said she learned a lot about firework safety, which made her reevaluate firework poppers.

Amber and John King said they learned more than their son Zayden. Amber King said she learned about how electricity arcs and how to better treat minor burns.

Deana Branum, the Hospital’s director of emergency services, said there was a good turnout for the event despite the damp weather.