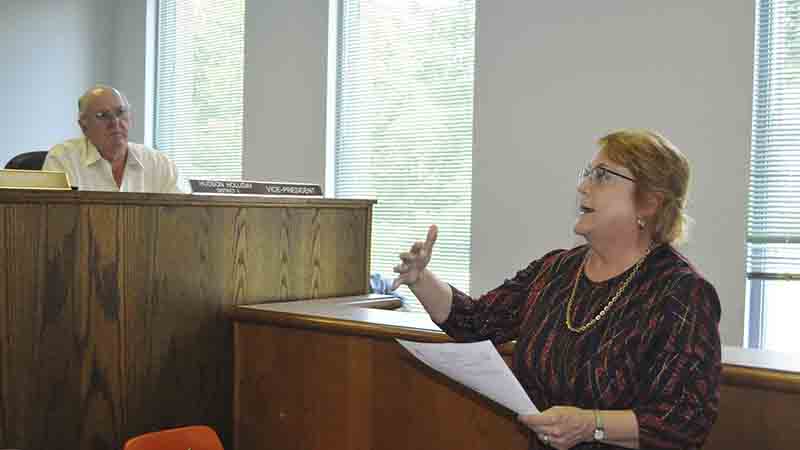 Nancy Bounds presents the Civic Women's Club's recycling survey results to the Board of Supervisors Wednesday.

The Civic Woman’s Club of Picayune presented a survey on interest to establish a county wide recycling program during Wednesday’s Pearl River County Board of Supervisors meeting.

The club surveyed 94 people to guage their interest in recycling and how likely they would be to participate in such a program, said club member Nancy Bounds. Ninety-three of the respondents said they were interested in recycling, and 75 percent of respondents said they would be likely to bring their recyclable materials to the Central Landfill in Millard if it accepted them, Bounds said.

Bounds said the club became involved in learning more about county interest in recycling when they heard the same story again and again from friends: residents save plastic bags or boxes to recycle, but has nowhere to take them and ultimately throws them away.

“It’s like training people to brush their teeth, but don’t give them toothbrushes. I think it’s just frustrating a lot of people in that way,” Bounds said.

Bounds said the community’s next step would be to conduct a more in depth survey and find out what recycling possibilities exist in the county.

The group wants to meet with businesses in the area that might be interested in recycling materials like cardboard boxes, plastic bags or old electronics, Bounds said.

The group did not expect the Board of Supervisors to respond, but wanted to share the information they gathered, Bounds said. Bounds told the Board that the group would be happy to work on an additional survey, if needed.

Board President Sandy Kane Smith said recycling was a hot topic in the county five years ago and that it is possible for the Board to meet with Waste Management and come up with a plan for recycling. Board Vice President Hudson Holliday said it was refreshing to listen to a group from the community share ideas about improving the county.

Scholarships awarded at Board of Supervisors Meeting