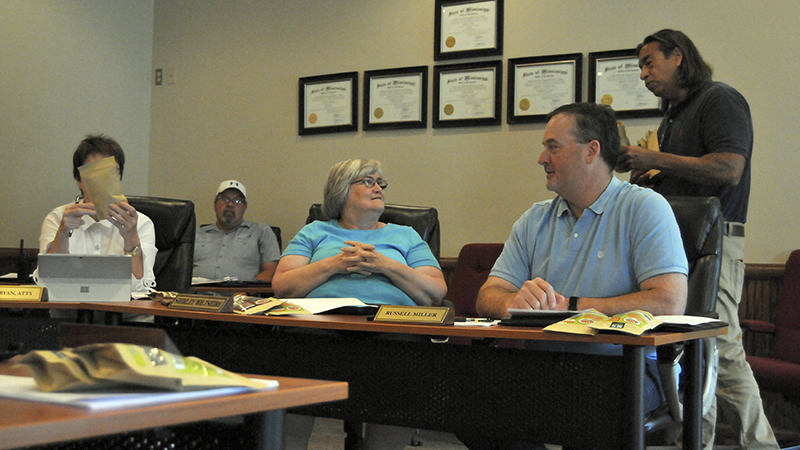 PITCHING TEA: From left, members of the Poplarville Board of Aldermen Shirley Wiltshire and Russell Miller listen to a pitch by Donald van de Werken to hold a tea festival. Photo by Cathy Cook

Engineer Jason Lamb informed Poplarville’s Board of Aldermen that the cost of asphalt paving for 36 streets in Poplarville is higher than anticipated.

The city has received two bids for phase one of the Surface Maintenance of City Streets during Tuesday’s meeting. The lower bid came from Warren & Warren Asphalt Paving for $991,958, and the higher bid is from Bush Construction Company, Inc. for $1,183,332. The Board expected phase one of the project to cost between $725,000 to $740,000. In 2018, it was estimated that the project would involve paying $85 per ton of asphalt, but the rates the city was able to find were $128 per ton.

Lamb said that if the city begins the process again, and advertises for new bids, he believes the cost will be even higher.

The Board has until June 25 to decide whether to accept either of the bids.

The project is funded by the 2019 Road and Bridge Bond program. At least 5 percent of the bond money funding the project needs to be spent within six months.

The bids were taken under advisement by the Board.

In other business, the Board is advertising for bids for drainage improvements.

A proposed Sweet Mississippi Tea Festival was given the support of the Board at Tuesday’s meeting. The festival was proposed by Donald van der Werken and is proposed for October 18 and 19. The festival would be a contest in which people would compete to produce the best tea, and festival goers who purchase a commemorative cup are able to vote for the best tea.

Van de Werken personally has over 10,000 tea plants and believes the festival could draw visitors from out of town.  The proposed festival would be similar to the Blueberry Jubilee, he said and would include music, art and food sales.

Van de Werken intends to look for sponsors from companies that sell tea, he said. He said he believes holding the festival in the fall will attract more participation from college students.

For more on the meeting, see Thursday’s edition.