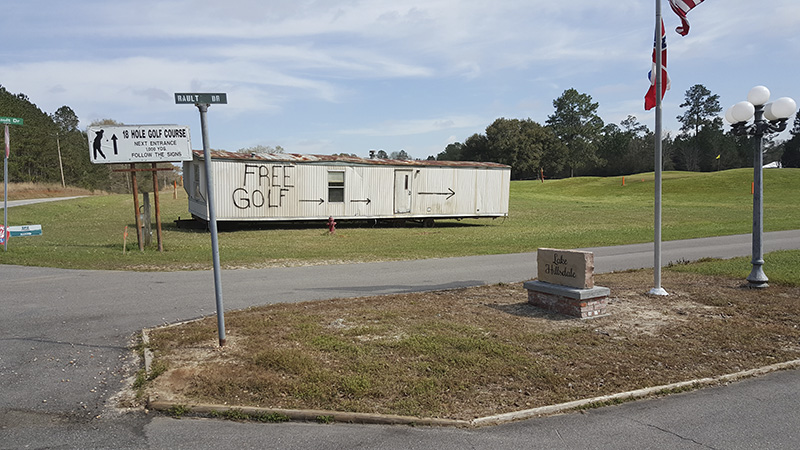 RELOCATED: The trailer in this photo and another like it have reportedly been moved from the entrance to Hillsdale subdivision. File photo by Jeremy Pittari

The Pearl River County Board of Supervisors voted Monday to “condemn” property owner Mark Gibson for placing what were  referred to as “two old raggedy trailers” on property at the entrance to Lake Hillsdale.

Holliday further called the placement of the trailers an act of “intimidation” against the residents who live there and referred to Gibson as “a bully.”

The Board further authorized attorney Joe Montgomery to start “any and all actions of legal means” by which the Board can remove the trailers and hold Gibson responsible for any damages incurred in the event the trailers are not moved by March 6.

When reached by phone Monday afternoon, Gibson said he had not yet received any notice from the Board or its attorney.

Gibson maintained he is a “law abiding citizen and follows the letter of the law.”

“I am sure we will take appropriate action when we receive whatever information they send me,” he said.

Gibson said he has been unsure what to do with the property in question, but said he placed the trailers there because he thought he might need office trailer space “for construction projects we’re going to start up that way.”

One trailer, facing the roadside as motorists exit I-59 toward the entrance of Lake Hillsdale, has the words “Free Golf” and a series of arrows pointed to the entrance of the subdivision spray painted on the side.

Gibson said the markings are a “marketing tool” for the subdivision’s golf course “which hasn’t done any business in a long time.”

“I own it,” he said referring to the golf course. “I can’t give away something I don’t own.”

Mel Hunsinger, president of the Lake Hillside Property Owner’s Association, said the golf course belongs to the POA and shares Holliday’s sentiments about those trailers.

“They are a horrible sight,” he said. “They should not be there.”

In other business, Supervisors decided to begin the process to permanently solve Americans with Disabilities Act access problems to voting sites in county-owned facilities.

Reggie Hanberry, District IV Election Commissioner, told the Board Monday that discussions have occurred in an effort to make permanent changes to meet the ADA standards at voting precincts operating in county facilities.

“We agree with that,” Hanberry said. “The mechanics of getting that done is the other issue.”

He said an application needs to be completed, along with a cost analysis of such a project. Both of those will need to be sent to the Mississippi Secretary Of State.

County Administrator Adrain Lumpkin said he asked Les Dungan with Dungan Engineering to determine what would be necessary and the cost involved.

Lumpkin said the county may be able to recoup some of the expense under state grants being made available for that purpose.

Dungan said there are at least 14 precincts that will require a concrete pad and striping for the parking lots, as well as the placing of additional signage.

“We want to fix this and not have to come back and worry about it,” Lumpkin said.

Hanberry said the Election Commission has temporary ramps that can be used where the county does not own the facility.

Lumpkin said the county is not permitted to conduct permanent improvements on private property.

The Board also approved allowing Road Manager Charlie Scheidler to advertise for bids to have asphalt hauled to road repair sites in an effort to quicken the paving process.

Holliday said the department has five trucks, and pavers often spend much of their time waiting on asphalt to be delivered from afar.

“That’s the weakest link,” Schielder said. “The biggest thing is keeping the paver moving. We need to utilize everything we can to get as much done as we can.”

Holliday noted Scheidler would have the option of not utilizing the outside haulers if they were not needed.