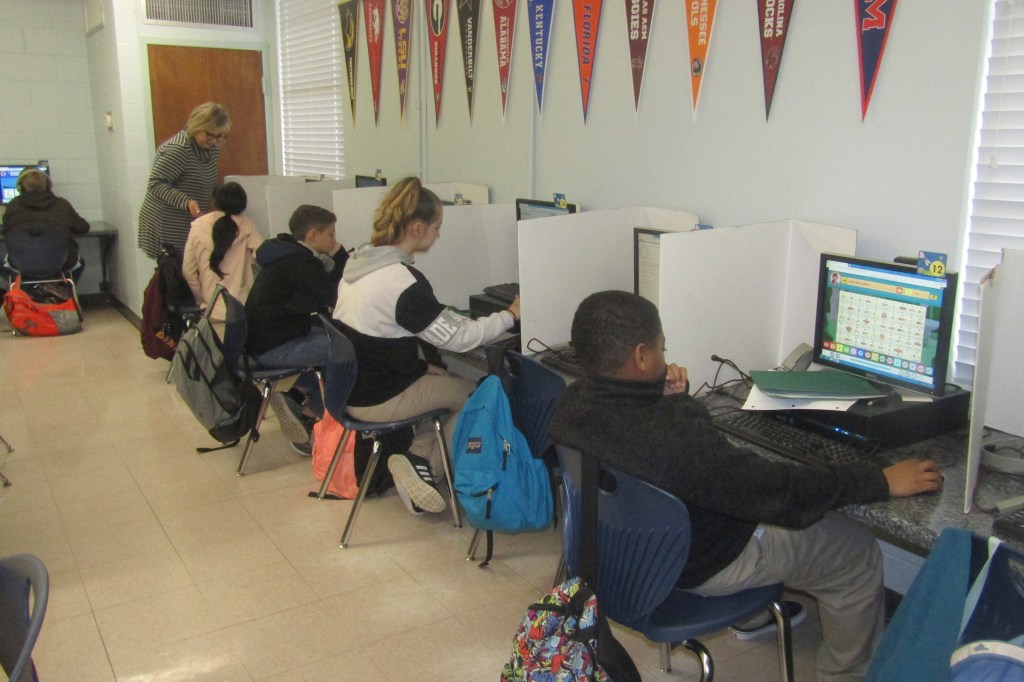 These students at South Side Upper Elementary School prepare for assessment tests next week.

Local students will begin their assessment tests Monday morning, and it is a process that makes teachers as nervous as their students.

The tests, which cover the entire spectrum of secondary school subjects, are the tools by which the state marks its grade on a district’s successes and failures.

Those subjects include reading, writing, math, and science.

South Side Upper Elementary School Principal Debbie Smith said it is important that students get a good night’s rest, eat a good dinner the night before, have breakfast the morning of and receive encouragement from their parents prior to the start of testing.

“We will ask parents to also write a little note to their child,” she said. “A lot of times, they will send them in ahead of time and the teachers will pass them out the morning before testing. They find themselves surprised with a sweet note from a parent or grandparent.”

Smith said that as a principal, she is not allowed to participate in the testing process.

“At that point, I become a cheerleader,” she said.

South Side uses motivational tools to encourage students to do well.

There is a trophy presented to the grade level that has the highest percentage of students that score proficient or higher.

“We also have a cheer we do in our building, and the kids get a kick out of that,” Smith said.

There have been some changes in the assessment tests and Smith said teachers have to teach the college and career standards on which the students will be tested.

Teachers are able to use the materials they have, but the standards provide a guide of the skills they want each grade level to cover.

“We are trying to work together as a district, that keeps us working on the same skills close to the same time frame,” Smith said. “It’s broad and open enough that our teachers have the freedom to pull the materials they need to cover those particular skills.”

She said it is difficult to say who gets more nervous about the tests: the teachers or the students.

Smith said teachers go over a student’s previous year’s score individually, including how far the student has come in that time, and set a goal with each child based on how much they want to achieve in the next year.

“The students buy into it and it makes them understand why it’s important for them to do the best they can,” she said. “If they go in and just click answers, that counts on our accountability and on that teacher’s ability to teach in that classroom.”

She said third grade teachers are feeling the most stressed because the bar has been raised for the third-grade gateway tests.

Last year, students had to score a “2” to be promoted to the next grade. That has now been changed to a “3.”