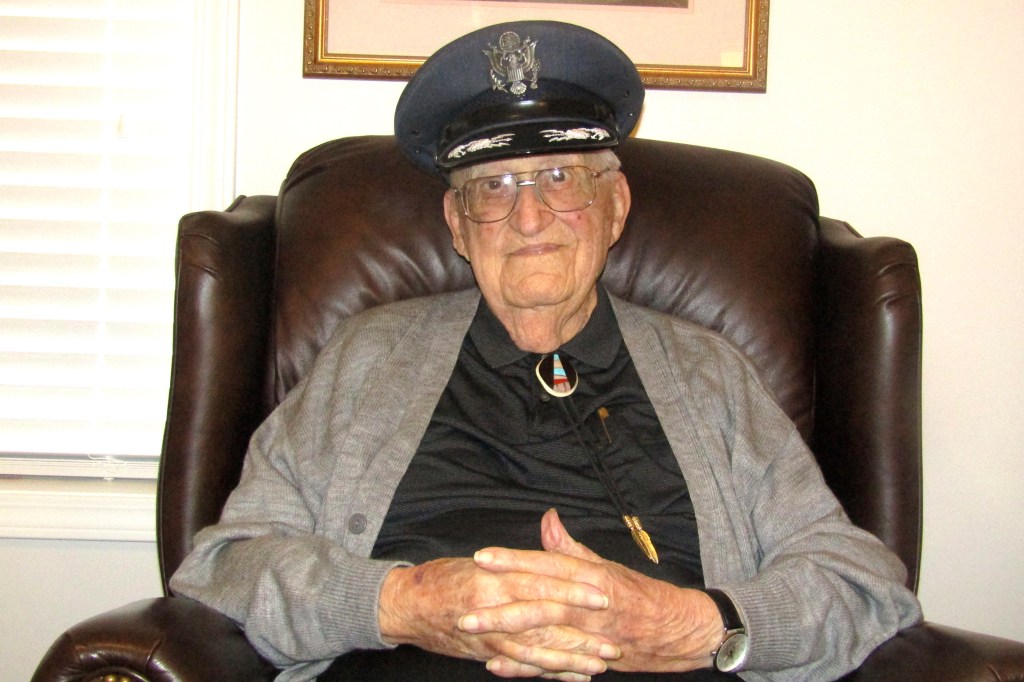 Richard Carnett wears his Air Force hat which was part of his uniform for more than two decades.

Richard Carnett has been featured in the Picayune Item before.

The date was June 24, 1990, and he was shown on the front page doing something he loved — operating a shortwave radio.

In fact, he was president of the local amateur radio club as a mere youngster at the age of 72.

However, the picture is deceiving.

It shows a man just sitting. But he’s done much more than that, traveling the world to meet the folks he spoke with on that radio.

Carnett is also a decorated veteran of World War II and the Korean War, a Master Mason, a Shriner, a father, and world-traveler.

Days away from turning 101, Carnett says he is feeling well and admits to having “a very colorful life.”

“I can’t think of an occasion that was more important than the others,” he said.

The major part of Carnett’s life has been serving with the military — mainly with the U.S. Air Force.

His duties included serving with the Allied Command in Tokyo, Europe, Guam, Japan and Korea.

Carnett went into the service for two years.

“He then came out for two, then reenlisted for a lifetime,” said his daughter, Nattie Carnett-Kennedy.

He retired from the armed service after more than 20 years, then went on to a job in the private sector for just as long at a company that worked for the nation’s defenses.

The walls in his room speak to Carnett’s legacy.

Silver Stars, commendations, and the one of which he says he is most proud — a certificate of achievement from the United Nations Command Headquarters.

“He was a fine officer, I can tell you that,” he said of MacArthur.

Carnett has seen the world change over the last century in many ways.

His daughter says he is most amazed by the technology of today’s cellphones.

Carnett said he looks to the next generation and the future with optimism.

“I think by and large the younger generation understands the love of country,” he said. “There are some that look upon it as something to achieve. Others look on it as a waste of time.”

Carnett said he never gave too much thought to living a very long life, adding he cannot think of anything he has not done that he would like to do.

He spoke of the secret for having a long life.

“I had a very interesting career and I enjoy life. I don’t think I was ever in an assignment I really disliked. I think I’ve had an important life.”

A happy ending-How a dream helped a Picayune resident…