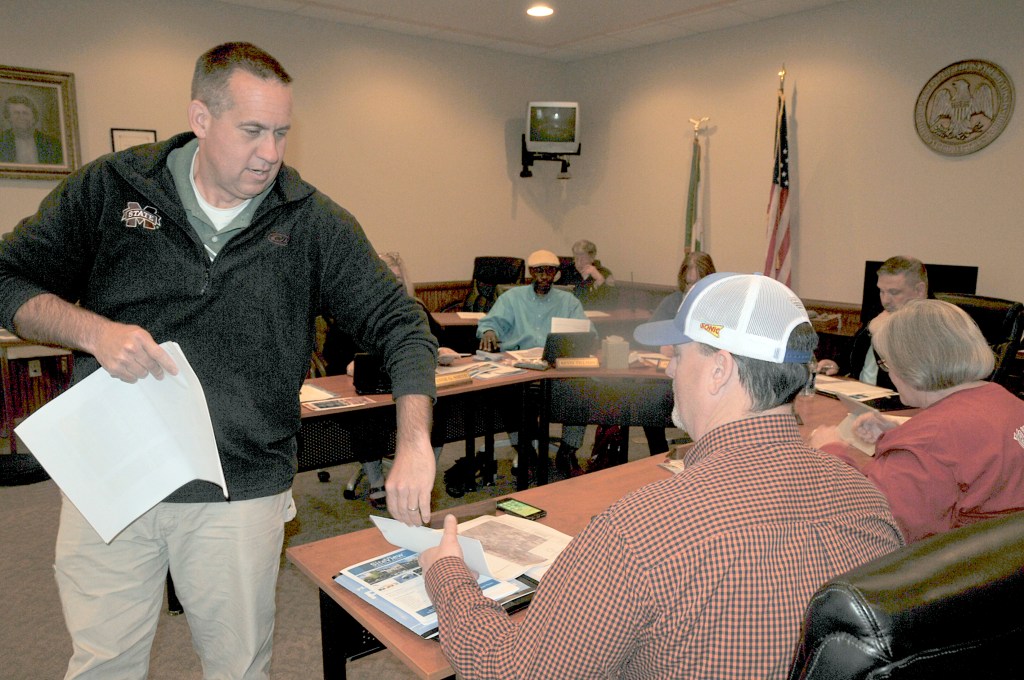 Engineer Jason Lamb hands out maps to members of the Poplarville Board of Aldermen that outline where the proposed street and drainage improvements will occur.

The process to begin improvements to Poplarville’s streets and drainage system will begin within the next few weeks.

Jason Lamb, an engineer with The Walker Associates PLLC, told the city’s Board of Aldermen on Tuesday that advertising for bids to conduct Phase I of the project will begin March 21.

As previously reported, the Board approved a $1.5 million General Obligation Bond to be used for the infrastructure improvements. Repayment of that bond is said to not entail an ad valorem increase.

Although the funds from the bond have yet to be deposited, Lamb said advertising for bids could proceed.

The project will be split into three phases.

The first phase will consist of new asphalt on streets at approximately 30 locations across the city, as well as a new parking area at the city park.

Lamb noted residents are beginning to see what they may perceive as “graffiti” around the town. However, those markings are being put in those places to help the engineers “easily communicate.”

“The questions are starting to be asked,” Mayor Rossie Creel said. “I think it gives all of us a chance to touch on what we have going.”

He said the roadways chosen for repair in the first phase did not have as many complications to consider. He expects the work to be completed during the summer.

“In my opinion, that is a sufficient amount of work to make it worth somebody’s while to come to Poplarville,” Lamb said. “It’s really amazing how fast this can go for this particular style of work.”

Bids for phase I are expected to be opened on April 25. Lamb estimates work will begin within 110 days after that.

Lamb said Woodard Street was not originally in the plans, but  it was added because the area has been plagued with problems that need to be addressed.

“When else would you approach it or have the money to do it?” said Alderwoman Shirley Wiltshire.

Lamb said the timeline on phase II will depend on specific details, including easement acquisition.

A bid opening for that phase of the project is tentatively scheduled for June 4.

Phase III will entail repairing asphalt where drainage work was conducted in phase II with bids tentatively scheduled to be opened October 15.

There was some discussion about conducting drainage repairs in phase I, but Lamb said the design work for those projects is more time-consuming.

The Board voted unanimously to proceed with the plan and timeline as provided by Lamb.