Luke responds to Letter to the Editor 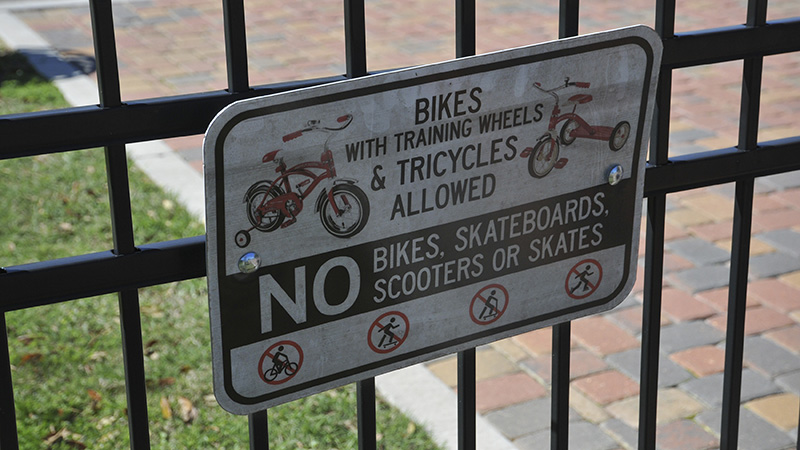 PARK RULES: Several signs posted at Crosby Commons outline the rules of its use. Photo by Brian Graves

Crosby Commons is the most recent addition to Picayune’s park system, opening about three years ago, and the use of that park comes with a set of rules.

Prior to its construction, it was the site of the old Crosby Memorial Hospital, a facility that was later renamed Highland Community Hospital. When a new location for that hospital was built across town, the city took ownership of the lot, tore down the old medical facility and built a park.

Since its completion, City Manager Jim Luke has sung its praises, most recently speaking on a number of occasions about how it won awards from various state agencies last year.

However, a recently published Letter to the Editor included some complaints the author noted during her recent visit to the park.

Luke said the opinion piece entailed an inaccurate perception of what spending time at the park and walking track can be like.

In the letter, the author complained about skateboarders and children riding bicycles on the walking track, unleashed canines posing the possibility of dog attacks, unsupervised adolescents using foul language, dog waste being left on the walking track and issues with trash.

Luke said signs are posted at the park outlining the rules that prohibit the use of bicycles and skateboards within the park. Visitors are also asked to pick up after their pets. There are spots along the track where pet owners can deposit pet excrement.

“There are signs that say what is prohibited,” he added. “Now, does an 8-year-old kid that comes in on a bicycle stop and read the signs? Maybe not. And, it’s possible you may see a skateboarder out there occasionally. Is it possible a dog may go to the bathroom there? Yes.”

Luke says he walks the track for an hour each morning and evening.

He said that in his observations during those walks, at least 90 percent of people at the park pick up after their dogs.

“There is always going to be someone who may not. Things happen,” Luke said.

However, Luke said he has never seen the types of situations of which the letter writer described.

“It is up to us as a community to take care of the park,” Luke said. “I guess it’s possible someone might be scared to tell somebody if they see one of the rules broken.”

Luke said that if he saw a park goer breaking a rule, he would respectfully point out that infraction.

“Most adults I know would say something in a heartbeat if they are trying to walk the track,” he said.

He said enforcing the rules include “trying to be rational” with kids who are 9- to 14-years-old.

“Do we want to use taxpayers money and use policemen to guard it 24 hours a day? I don’t think so, especially in light of the fact we have had no complaints,” Luke said.

According to his records, the author of the Letter to the Editor never attempted to contact his office with her concerns.

Luke went on to add that his staff report no complaints being lodged with city personnel concerning problems at the park since it opened.

“There is myself, an operations manager, a public works director, a police department, a code enforcement officer, and there are people there every day doing clean up,” Luke said. “If anyone sees any problems, there is no reason not to contact us and we can take whatever action we can.”

He said the park is the property of the public, and each citizen shares the responsibility for keeping it safe and clean.

“I believe they have been doing that and continue to do that,” Luke said.