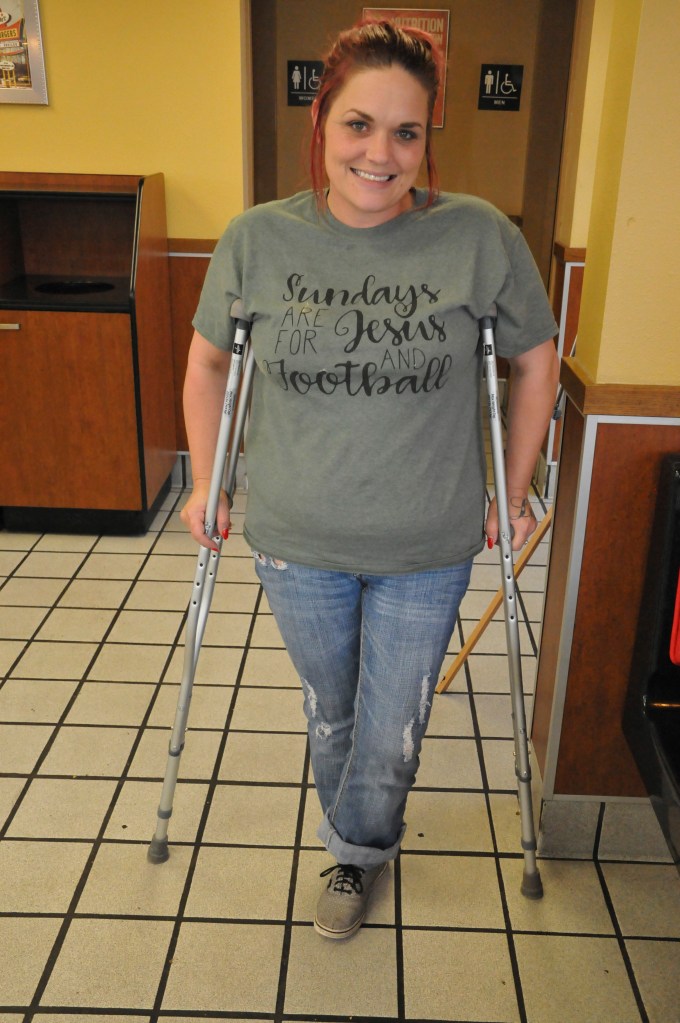 Jessica Willis poses with her crutches she is having to use while recovering from surgery to amputate her left leg. Fundraisers are now planned to help raise money for a prosthetic leg for the mother of two.

Jessica Willis of Poplarville would appear to be a perfectly normal young woman.

Only the crutches she uses alludes to the fact that she has had part of her left leg amputated. But she still drives to where she needs to go and takes care of her two young children.

Willis is now hoping to get that vacant space filled with a prosthetic leg, which will help her life return to a more mobile and painless one.

“I was run over with a lawnmower when I was 10 years old,” she explains. “Over the past 22 years, I have had 40 surgeries. I had pins and rods and an almost constant pain.”

Last year, doctors tried a process where muscles were taken from her back and transplanted in the leg.

That process was unsuccessful, but it was then doctors noticed the left leg “was drastically shorter.”

“They never noticed it because I always walked on my toes,” Willis said.

She had two options: a surgery to lengthen the leg or amputation.

“I was just tired of having surgery after surgery and no guarantees of success,” she said. “So I said to cut it off and that would guarantee that it would work.”

Willis said her son, the oldest of her two, cheered her on after the amputation. But, her young daughter did not take it as well.

She then discovered her insurance does not list a prosthetic as a medical necessity.

“I would think it is necessary for anyone to have a leg,” she said adding she talked to many companies about the cost of prosthetics.

Willis says she is thankful for all who have already pitched in to help, not only financially but just with everyday life since her amputation.

“It has been so amazing how this community has been there for me,” she said. “Who would want to live anywhere else but here when there are that kind of people who are this caring?”

Between the funds raised and Willis’ savings account, nearly one-third of that goal has been collected.

That care will show itself again when there will be a ribs/ribs plate fundraiser on March 9 in front of Dimples in Poplarville. Pre-orders can be called in at 769-936-9355.

Donations can also be made directly to the Jessica Willis benefit account at Keesler Federal Credit Union.