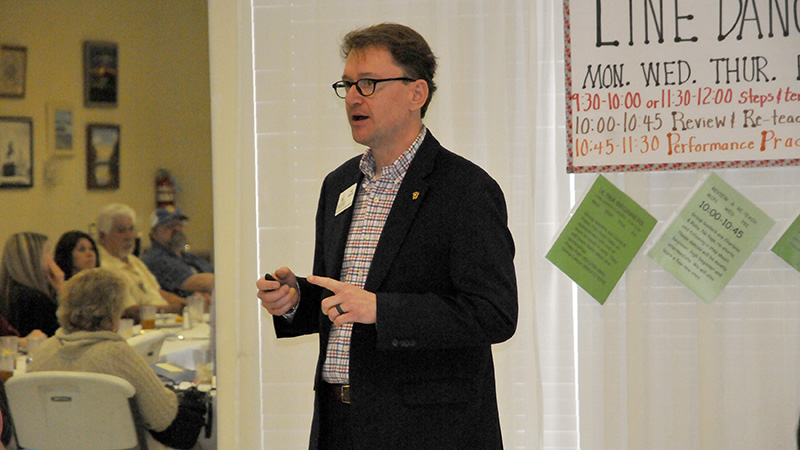 Wes Brooks, with USM’s DuBard School for Language Disorders, spoke to the Rotary Club of Picayune about the school’s programs and successes.

What does someone do when the only way to ask for a glass of water is to point and yell?

That is a situation, especially with children, than can lead to frustration and behavioral problems as they grow into adulthood.

The DuBard School for Language Disorders, located at the University of Southern Mississippi’s Hattiesburg campus, helps people deal with such problems.

Wes Brooks, the school’s development coordinator, spoke of the school’s successes during Tuesday’s meeting of the Rotary Club of Picayune.

Founded by Dr. Etoile DuBard in 1962, the school continues to create success stories by helping children who suffer from a range of communication disabilities.

“Our mission is to give the gift of language to individuals with severe speech and language disorders including written disorders such as dyslexia,” Brooks said.

The school is under the umbrella of the School of Nursing in the School of Speech and Hearing Sciences where it is one of three programs.

Brooks said the school assists with both enrollment services as well as outpatient services.

Under enrollment services, students attend classes Monday through Friday as if they were attending a regular public school.

He said there are eight classes that never exceed an enrollment of 10 students.

There are currently 81 students enrolled and the school has 84 outclients.

The outclient services, Brooks said, operate as if a person was receiving private, one-on-one services and is fee-based.

Within the school districts located in Pearl River County, Brooks said there is one person currently enrolled, one outpatient, nine former enrollees, three former outclients, and two on the waiting list.

There are also 354 children who, when it is determined the school is not best suited to their needs, have been offered referrals to another program.

“We are pretty good at telling you where the right place is,” Brooks said.

He said there are currently a total of 125 children on the waiting list for enrollment and 120 waiting for an opening to be an outclient.

Brooks said the wait can be anywhere from one year to 18 months.

As Brooks described some of the success stories at DuBard School, he spoke of one who went on to become the head of information technology for a company in Dustin, Fla.

“In 2017, five graduated with degrees from USM with two of those getting their master’s degrees,” he said.