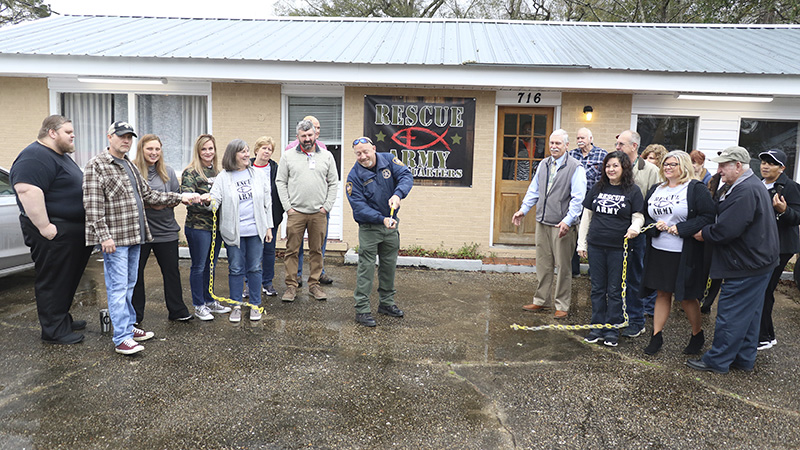 NOW OPEN: Center, Lt. Rob Williams uses a bolt cutter to cut a chain in an alternate version of a ribbon cutting at the newest location of Rescue Army, a faith-based group who helps people dealing with addiction. Photo by Jeremy Pittari

“It took an army to rescue me,” Sarrah Willhite said Friday morning to a gathering that marked a new location for the volunteers she now leads to help others with addictions.

The Rescue Army opened a permanent home at 716 N. Beech in which to house its four branches: Recovery, Rescue, Evangelism and Education.

Willhite says those are four of the major keys in reaching out to an ever-increasing population of addicted persons. She also stresses there is no lack of need for those services in Pearl River County.

Willhite thanked the Pearl River County Sheriff’s Office and the support the department’s staff provide to the program.

She said every attempt is made to help those recovering avoid criminal charges due to their addictions.

“There’s no guarantees or promises and it’s all on a case by case basis, but the sheriff’s office has been awesome with that,” Willhite said. “They don’t want to send everybody to prison.”

Sheriff David Allison, who was not able to attend the opening, said he “definitely supports this program and appreciates the work they do.”

“I am glad there is now this way for people to not only get off drugs, but to have a relationship with the Lord and stay clean and live a productive life,” he said. “I urge anyone who needs help to call or go by and talk to them.”

Willhite said the purpose of the Rescue Army is not just to “rescue the individual, it’s to rescue the entire family.”

Lt. Rob Williams with the Sheriff’s Department said during his time working narcotics cases he saw first-hand the effects of addiction on individuals and families.

“A lot of people focus on the addict,” Williams said, “but you have to remember the moms, the dads, the brothers and sisters and everyone else who is left to pick up all the pieces.”

“Some of these addictions are so bad, we have gone to meth labs where they open the door with the smoke rolling out and have a baby in their arms,” he said.

Williams said the best part of the Rescue Army is being pro-active.

“You cannot be reactive in this kind of environment,” he emphasized. “You need to get them at the front end of it. This program is going to do great things for this community.”

Pearl River County Coroner Derek Turnage placed an urgent exclamation point on the need for programs such as Rescue Army.

Turnage said just before he had left his office Friday morning, he counted a tragic statistic in this county.

City, County give update to Chamber