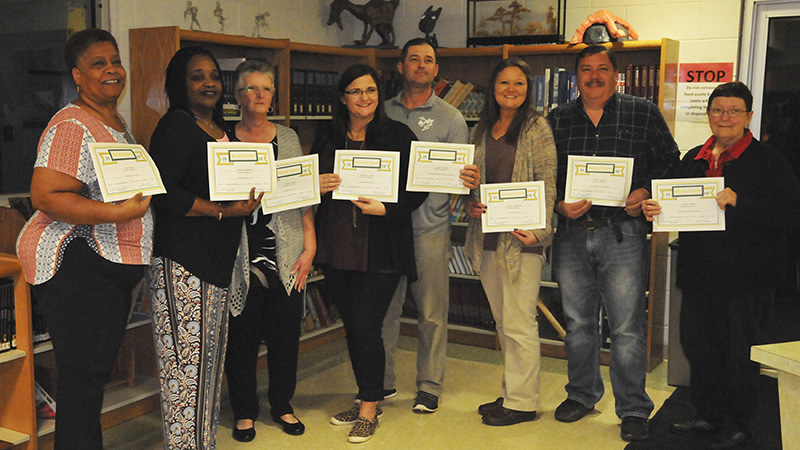 Board President Tommy Strahan presented Employee of the Year Awards to 11 of the District’s staff members as their colleagues, friends and families watched and acknowledged their achievements.

Scott Necaise, who is serving in his first year as director of field operations, took the top honor as Director of the Year. In his duties, Necaise is responsible for maintenance and the district’s custodial team.

Technology Staff Member of the Year was awarded to Johnathan Hatfield.

In the area of Child Nutrition, Marlow McKinnis received the top honor in the department as she is currently serving for her 46th year in that area.

Scotty Berry was honored as Field Operations Staff Member of the Year.

Brandi Chambliss, who serves as front office secretary for Poplarville High School, was recognized as the Top Staff Member of the Year for that school.

Ann Knight was honored for her work at the Career Development Center including being a bookkeeper, secretary and receptionist. She has been with the district for 16 years.

Middle School of Poplarville Administrative Secretary Dorothy Robinson received accolades for her work with that staff.

Michelle Allison won the honor for her work at Poplarville Upper Elementary. Allison has served as bookkeeper for the past seven years.

Sharon Odom, who has worked at Poplarville Lower Elementary for 25 years, was recognized for her work at the school’s front desk and selected as Staff Member of the Year at that school.

Danielle Hickman, who has spent 15 years working in the District’s Federal Programs office as bookkeeper and secretary, was given the Central Office Staff Member of the Year honor.

At the end of the presentation, District Superintendent Carl Merritt asked for the family members of the honorees to stand and be recognized.

“We thank you for sending your loved ones to us,” Merritt said.