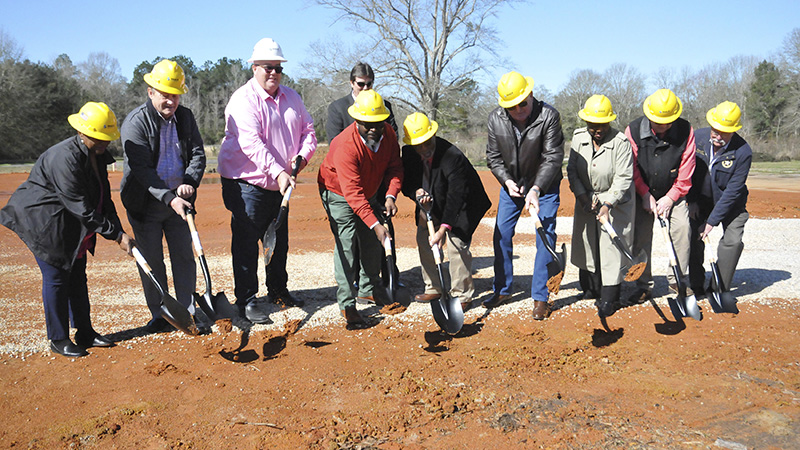 It has been almost a decade ago since Mary H. Richardson, considered the matriarch of District 1, proposed the idea of a community center during a Martin Luther King Jr. program, and challenged families to give $1,000 each to help fulfill that vision.

Local officials expressed hope Wednesday morning that Richardson will be able to attend the ground breaking for the center, which will bear her name.

District I Supervisor Donald Hart led the ceremonies extolling the potential the new center, proposed for construction on Beech Street, holds for the area’s residents.

“Besides being an excellent location for a voting precinct, community centers are good meeting places for seniors, children and families,” Hart said.

“They can offer an enormous variety of educational, social and recreational activities which are tailored to what the members of the community are interested in.”

“Enthusiastic members of District I are hoping to create a meeting place for all ages with programming aimed at a wide variety of needs,” Hart said.

However, while efforts to raise funds for the facility came in at $75,000, which came from private citizens, local banks and industries, in-kind services will cover the rest so no tax funds will need to be borrowed.

Those in-kind services will come from local contractors, electricians, concrete finishers and plumbers, who will provide materials and the work.

Hart said that while the project has not been in the public spotlight for some time, work to make it a reality progressed.

“We had plans being drawn up and there were a lot of things being done behind the scenes,” he said. “They had to find water taps and go before the planning committee.”

Hart noted this project is a joint effort with the Board of Supervisors and Picayune’s City Council, “not to mention the many who are donating time, materials and labor to try and make this happen.”

Hart said it was just a natural to name the center after Richardson.

“It was her idea,” he said. “She has done a lot with voter’s rights. She is almost like a mother to this particular community. Everybody knows her and has gone to her for one thing or another. She used to work at the hospital and delivered a lot of babies – me included. She has done so much for our community we wanted to show our appreciation.”

The center’s namesake was not able to attend the groundbreaking as the 90-year-old was sidelined by an illness.

“We are hoping to have this center open this fall, barring any hiccups, and having Miss Mary here to cut the ribbon and be the first one inside,” Hart said.

“We appreciate the efforts of community to make this happen,” Hart said.

He added that he feels it will improve the quality of life for Pearl River County citizens.