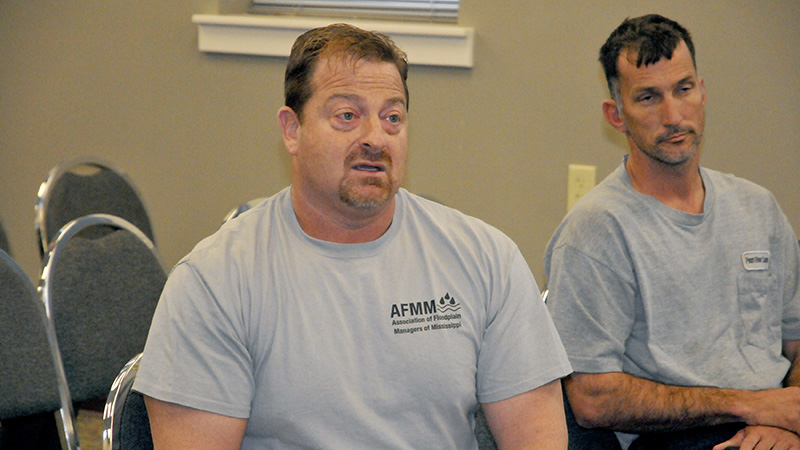 ALL ON BOARD: Board of Supervisors President Sandy Kane Smith speaks about the need for a unified effort to clean the local environment. Photo by Brian Graves

Company is coming and it’s time to clean up.

That was the message shared Tuesday morning during a meeting of civic, business and government leaders as they formulated a plan for next month’s Great American Clean-Up Day.

Christy Goss, special projects coordinator for the city of Picayune and director of Keep Picayune Beautiful, said the goal this year is to have a unified effort between the county and cities to make the day successful.

“We are all in this together whether it’s our church, our community, our street,” Goss said. “We want to partner all together and make this a big countywide project.”

Goss said the current plan is to gather at Crosby Commons at 8 a.m. that day where participants and volunteers would sign in. They would return at noon for a sponsored lunch and “review the accomplishment of the day.”

“Some my not want to start at that time, but as long as we can keep track of what everyone is doing, then we will still be ‘one,’” she said.

Pearl River County Board of Supervisors President Sandy Kane Smith said safety equipment needs to be provided such as orange vests and gloves, to protect as volunteers from syringes.

Goss said there are more than enough gloves and garbage bags that have been provided from the state, and Mississippi Power has offered to provide “pickup sticks” for volunteer use.

Local power companies will also be participating as part of their “Renew Our Rivers” effort as they remove trash from the banks of local tributaries.

Part of the preliminary plan is to provide central trash containers at volunteer fire departments to make disposing of the waste easier.

Plans also include promoting the day in the area schools, something Goss said many of the educational clubs are “very interested” in doing because of the need for community service hours.

District I County Supervisor Donald Hart distributed some newly-designed coloring books about the importance of keeping a clean environment that are targeted at younger people.

“We really do need to start them young thinking about this,” Smith said.

Sheriff David Allison said he would be providing two crews of state inmates that will be able to assist, especially on the state roads.

The county’s Master Gardeners are also stepping up to help by landscaping areas that might need some more color.

“Keeping our county clean is also important to our county’s economic development,” Smith added. “No one would want to operate a business where it constantly has so much trash along the roads.”

Another meeting for those interested is scheduled for Tuesday, March 12 beginning at 10:30 a.m. at the Picayune City Council chambers at City Hall.

For more information on how to volunteer or contribute to the Clean-Up Day, contact Goss at 601-798-9079 or by email at cgoss@picayune.ms.us.

District, Teachers of the Year announced at Picayune