Hughes celebrated at recent Saints game for her years of achievements 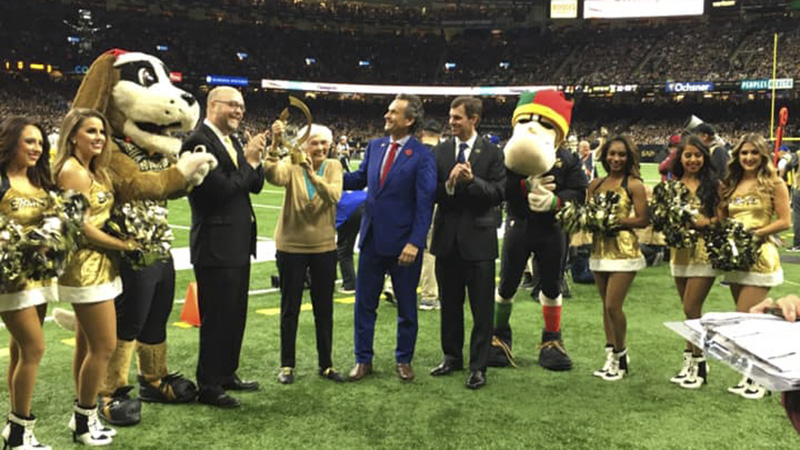 Gladys Hughes, center, was chosen as the 2018 People’s Health Champion at a recent Saints game.

On December 23rd the Superdome was filled to capacity for the Saints vs. Steelers game. In attendance for the game was Pearl River River County resident Gladys Hughes, who shared the excitement of the crowd. But her feelings of excitement and anticipation were heightened because she would soon be recognized as the People’s Health Champion during the game. Her name and story would join those of Irma Thomas, Fats Domino, and Gail and Tom Benson to name a few.

This honor, wonderful in itself, was even more special because it was a result of Hughes’ granddaughter putting her name in the running for the designation. Gretchen Hughes Elliott, and her husband, Blake, attended a Saints preseason game in August and noticed a woman was recognized as People’s Health Champion for her contributions. Almost simultaneously the couple looked at one another and felt compelled to nominate “Grammy”.

Elliott said, “Grammy is awesome.  I guess you have to get a little older to realize that your grandmother is a really special lady. She does so many amazing things. We knew it, and we wanted others to know it too.”

The selection committee reviewed the submission and agreed with Elliott’s nomination of Hughes and her accomplishments. Hughes is a WWII veteran, a retired teacher, author, playwright, and director. Her “can do” spirit and love for others is perhaps best indicated by her work in the Ms. Veteran America Competition. At 95 Hughes recently returned home from judging this competition for the sixth time.

After being named second runner up in the first Ms. Veteran America Competition in 1989, the organization recruited Hughes as a judge. The organization, Final Salute Inc., holds the competition annually to draw attention and find solutions to the problem of homelessness among women veterans and their children. The goal of ending homelessness for these courageous and well deserving people drives Hughes to continue working with the organization year after year. Hughes’ work to meet the needs of others sets her apart and makes her worthy of the honor of Peoples Health Champion 2018.

“The entire experience was amazing. It’s hard to explain what it was like. They served a fabulous buffet with all sorts of delicious food, but I was ushered about meeting so many people that I don’t think I ate more than a bite or two,” Hughes said.

“When the players came onto the field, the fans were totally pumped for the game, and the noise level was tremendous. To be able to sit on the field and see the players come into the stadium and kneel under the goalpost saying a little prayer before the big game was special. They treated me like a queen.  I was presented with a swag bag, a shirt, a trophy, an autographed Cam Jordan football, and honored with a special tribute of some of my accomplishments.’

“To experience something like this at my age added to the memories I already have. At this point it’s at the top of my list.”