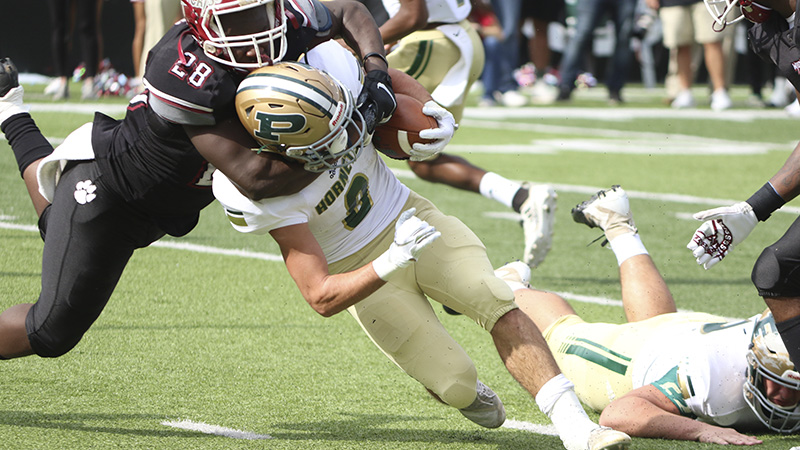 Tyson Holston fights off a Louisville defender during Saturday's state playoff game, held on the University of Southern Mississippi campus Saturday morning. The Hornets fell to the Wildcats 25-20. Photo by Jeremy Pittari

HATTIESBURG – “We had a great year. The boys played hard. I have no regrets about the season or the game,” said Poplarville head football coach Jay Beech moments after the Poplarville Hornets fell to the Louisville Wildcats 25-20 at M.M. Roberts Stadium’s Carlisle Faulkner Field on the campus of the University of Southern Mississippi, on Saturday, December 1.

The Hornets led most of the game before a 21-yard touchdown reception by Niselbyion Kirk at the 10:08 mark of the final quarter proved to be the difference in a very competitive contest from beginning to end. Poplarville’s last attempt at a comeback fell short with a fumble at the Hornets’ 27-yard line with 2:33 remaining. Louisville ran the clock out from that point.

Poplarville (13-2) received the first half kickoff and was unable to move the football on its initial possession, punting the ball away. On Louisville’s first play, quarterback Deonte Yarbrough’s pass was intercepted by the Hornets’ Canaan Ray. From the 33, the Hornets moved the ball on eight plays to the end zone. Senior quarterback Antonio Barnes kept the drive alive by obtaining a first down on a fourth down and one rush to set up a first and goal at the nine. On the next play, Tyson Holston scored from there. Ethan Spiers’ point-after-touchdown (PAT) attempt was good, giving Poplarville a 7-0 lead at the 8:40 mark of the first quarter. The drive took 3:52 off the first quarter clock.

After a Louisville (14-1) punt, the Hornets returned to the end zone on a 12-play, 72-yard march. The Hornet offense mixed the ground attack with backs Chase Shears, Ethan Taylor, Corey Knight, and Holston. Holston scored his second touchdown of the game on a fourth and goal from the five-yard line. Spiers’ PAT was good, and the Hornets led 14-0 at the 9:39 mark of the second quarter.

Louisville answered with its first score of the game on the next drive. The Wildcats moved the ball 80 yards on 10 plays that culminated with a nine-yard Yarbrough touchdown pass to Alvius Haynes. Wildcat kicker Elijah Wilkes’ PAT was no good as Poplarville led 14-6 at the 6:11 mark of the second quarter.

Neither team was able to produce additional points as Louisville’s last scoring threat ended with the Hornets taking possession of ball due to an interception by Antonio Barnes with one second remaining in the first half. Shears led the Hornets’ rushing attack with 11 carries for 68 yards heading into the locker room. Poplarville outgained Louisville in yards 155-122.

Louisville scored on the opening drive of the second half on a three-play, 63-yard march. Kevon Jackson scored on a four-yard run to cut the score to 14-12. The Wildcats attempt to tie on a two-point play failed, and the Hornets led 14-12 with 10:40 remaining in the third quarter.

Blaise Breerwood replaced Barnes as quarterback in the second half and the Hornets immediately responded with a score of its own. Poplarville stormed down the field on six plays and covered 71 yards that culminated in a 44-yard Holston touchdown run. Spiers’ PAT attempt was blocked by the Wildcats’ Clartaveous Triplett. With 8:10 remaining in the third quarter, Poplarville led 20-12.

Louisville answered five plays later with a Jackson 14-yard touchdown run that covered 80 yards and removed 1:39 from the third quarter clock. Yarbrough’s two point conversion pass attempt went out of bounds leaving the score in Poplarville’s favor 20-18, at the 6:31 mark. The score remained the same until a fourth quarter score by the Wildcats that gave them their 9th state championship since 1985.

Tyson Holston finished as the top rusher for the Hornets with 13 carries for 93 yards. Shears finished with 12 carries for 77 yards. Casin Sones returned the football three times for 64 yards. Marion Barnes led the Hornets’ defense with 12 total tackles and one sack. Ross Barnett had nine total tackles and Zack Owen finished with seven. Poplarville held the edge on time of possession with 28:30-19:30.

Poplarville will return in the spring of 2019 for spring drills and jamboree opportunities.