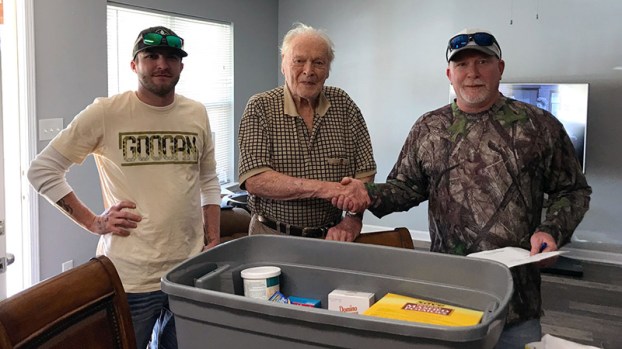 DONTATION: Gilbert Pfisterer, center, received one of the food baskets delivered by two local organizations who support veterans. The donations were made possible by a number of organizations and businesses. Submitted photo

Veterans in Pearl River County received a gift of food for the holidays due to the efforts of local organizations.

Members of the Sons of the American Legion, McSween-Johnston Post 73, Picayune, Miss., worked with the James L. Burge Veterans of Foreign Wars Post 3804, to distribute more than 100 food baskets for Christmas to local veterans and other Pearl River County residents, according to the release.

The annual Christmas Basket Food Drive included contributions from Sons of the American Legion, the Veterans of Foreign Wars, Froogle’s Cost Plus Foods in Bay St. Louis, Paul’s Pastry and the Church of Jesus Christ of Latter-Day Saints. The baskets included a 12-pound turkey, an 8-pound ham, several side dishes and a pumpkin pie from Paul’s Pastry.

“The annual drive exemplifies the spirit of the season, while allowing these veterans’ organizations to further their mission of service to our community, state, and nation,” the release states.

More than a dozen children had a Merry Christmas due to the efforts of employees at a local bank and... read more