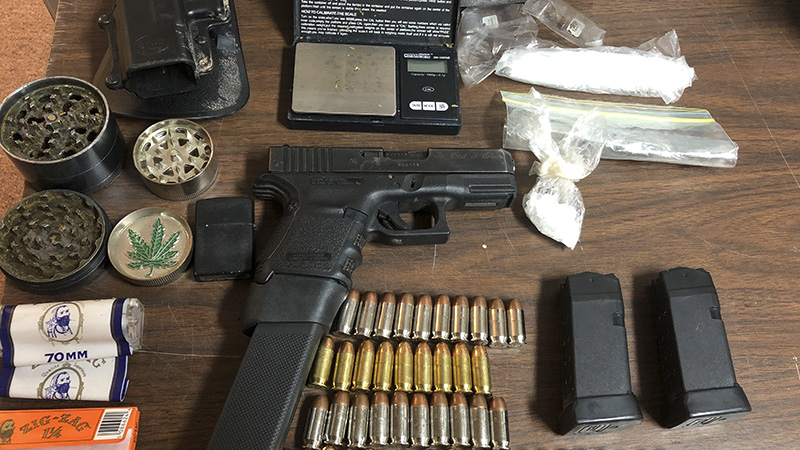 CONTRABAND: Above, is evidence and other items seized as part of two traffic stops that resulted in three people being arrested. Submitted photo

Three suspects were recently arrested by detectives with the Picayune Police Department for drug related offenses as part of routine patrols in the area.

Both cases took place on Oct. 29, and were initiated as traffic stops for routine driving violations, according to a departmental release.

Just after 6 p.m. that day, detectives saw a vehicle traveling south on Highway 11 towing a trailer with inoperable tail lights, leading to a stop, the release states.

As the detectives approached the vehicle, they could smell what appeared to be marijuana coming from inside the cabin, prompting the detectives to ask the driver, Timothy Adam Frierson, 29, of 91 Stegall Rd., Carriere, to step out so a search could be conducted.

Later that same day at about 8 p.m., detectives patrolling Interstate 59 saw a vehicle swerve off the roadway several times, leading to a stop near exit 4 in the southbound lane, the release states.

As the driver of the vehicle pulled over, the detectives saw a passenger throw what appeared to be a plastic bag out the window. The detectives then detained the driver, 27-year-old Brady Scott Rouse, of 34128 Reilly Rd., Slidell, La., and passenger, 51-year-old Amy Lynn Hundl, also of 34128 Reilly Rd., Slidell before recovering the bag. In the bag was a crystal like substance suspected to be methamphetamine, leading to both suspects being arrested for possession of a controlled substance with intent to distribute and tampering with physical evidence, while Rouse was additionally arrested for careless driving, the release states.

The vehicle was seized due to the evidence in the case indicating it was being used to transport narcotics, the release states.