Poplarville punched ticket for another shot at state title 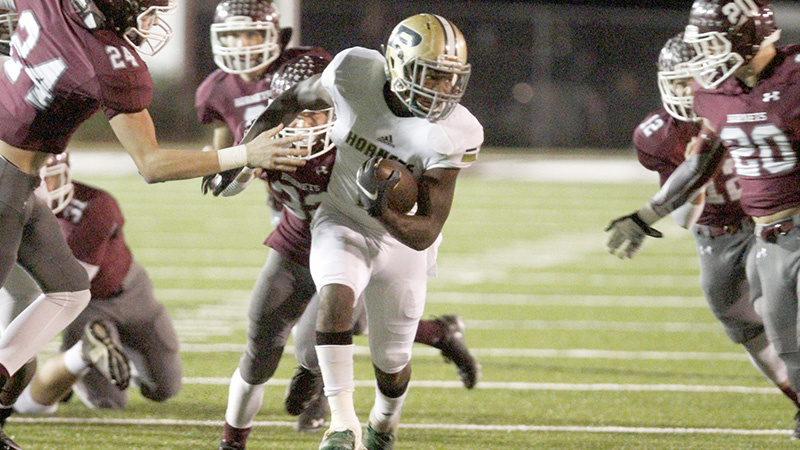 Poplarville running back Antonio Barnes runs through the East Central defense during the first quarter of their 4A South State championship game at East Central in Hurley on Friday, Nov. 23, 2018. Photo by John Fitzhugh, Sun Herald

Fast forward a year later, Poplarville junior running back Chase Shears proved himself as the next high school football star in the making for South Mississippi.

Shears scored three touchdowns on three touches in the first half to spark a 33-17 victory over East Central in the Class 4A South State title game, clinching Poplarville’s first trip to the state championship since 2016.

East Central managed to bottle up Shears in the second half, but the damage was done.

Poplarville (13-1) will play Louisville (14-1) at 11 a.m. on Dec. 1 in the Class 4A state title game at Roberts Stadium in Hattiesburg. Louisville beat Greenwood 17-14 on Friday to secure their spot in the game.

After losing in the 2016 state title game to Lafayette County and falling to East Central in last year’s South State championship, Poplarville is anxious to claim its rightful place as an emerging power in Class 4A.

Poplarville coach Jay Beech believes he is taking a special bunch of Hornets to Hattiesburg next week.

“These kids, this senior class and just the will to win,” Beech said.

“They have refused to lose. They don’t think they’ll ever lose a game. It takes a great team to beat them.”

Shears resembled a larger version of Brown, who is now a member of the South Alabama football team.

When Shears found a gap, he was gone.

When East Central defenders tried to make arm tackles on Shears, he easily shed their attempts on the way to the end zone.

“If we get him through the line of scrimmage, he’s got a good chance,” Beech said. “He’s that kind of back.

“It was amazing blocks by my lineman and it was green grass all the way,” he said.

Shears was wide open in the middle of the field as Poplarville took advantage of a short field following an East Central punt.

Shears didn’t touch the ball on Poplarville’s next five snaps, which included a one-play possession that ended with a PHS fumble.

Finally, Shears was again handed the ball and he ran 77 yards off the edge for another breakaway touchdown with 6:48 left in the second quarter.

Shears finished the game with seven carries for 180 yards and two touchdowns.

He also had the one catch for 40 yards and a score.

“I just leave it up to God and my lineman to block for me,” Shears said. “If it’s there, it’s there. Just make it happen.”

His performance was made all the more impressive considering that the East Central defense had shut down opponents all season long.