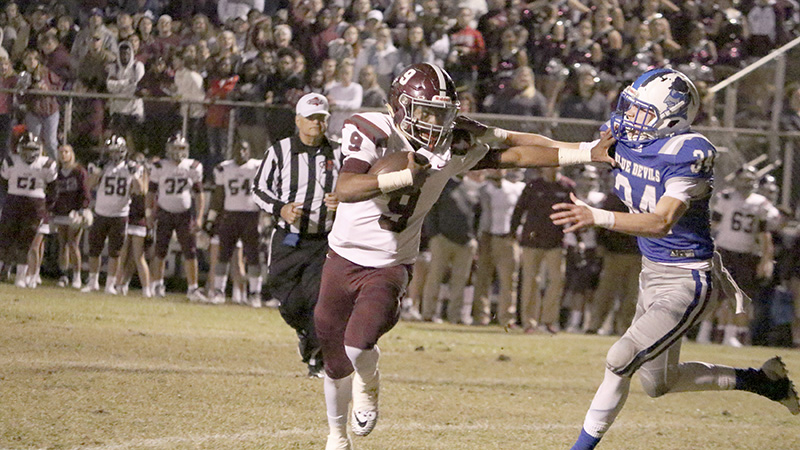 CARRIERE— The Picayune Maroon Tide is a team that hasn’t been stopped all year on the offensive side of the ball.

That was case Friday night when the Tide powered past Pearl River Central’s Blue Devils, dominating on both sides of the ball and securing a 58-7 victory moving their record to 8-3.

Tide Head Coach Dodd Lee was pleased with the overall performance from his squad but Lee also stressed that the Tide still has room for improvement.

“I told our kids, it’s an “inch” thing. We just have got to get inches better every week, if we do that we are a very a good football team,” Lee said.

The Tide started rolling early in the first quarter taking the opening drive and marching down the field 56 yards in only six plays.

The drive was capped off by a 2-yard touchdown run by standout running back Jortin Raine.

The PAT was good by Picayune kicker Isaac Brice to make it 7-0 with 9:53 left in the first quarter.

The following 2 point conversion would be good to make score 15-0.

Picayune would take advantage of getting the ball on PRC’s 34 yard line and would move down the shortened field to score a touchdown on a 13-yard run from Kaleb Hart with 9:23 left in the 2nd quarter; the PAT would be good to make the score 22-0 Picayune.

The Blue Devils would scrap back on the ensuing drive with some explosive plays.

PRC running back Kobe Whitehead dashed up the middle on the next play all the way to the Picayune 3-yard line.

Whitehead would later punch it in from 1 yard with 7:22 left in the first half.

The PAT was good from PRC kicker Sam Lambert to make the score 22-7.

Picayune started the next drive at the team’s own 49-yard line.

Winston Drain punched it in on a 10-yard touchdown run with around 4 minutes left in the 1st half; the ensuing PAT would be good to make the score 29-7 Picayune.

PRC quarterback Cameron Brunson threw an interception that was hauled in by cornerback Cameron Thomas, allowing Thomas to run the ball back to the PRC 36-yard line.

Raine’s number would be called again as he dashed forward for 36 yards for a Maroon Tide touchdown.

The ensuing PAT would be good to make the score 36-7.

Picayune got one more touchdown in before the first half ended when Tide wideout Kyler Lauga caught a short pass and found the end zone on a 76 yard touchdown pass from Tide quarterback Jakail Myers, giving the Tide a 43-7 lead heading into halftime.

PRC started the second half with a decent drive, but then it stalled and the Tide took over on downs.

It would only take the Tide four plays to score as running back Jortin Raine scampered to the end zone to make the score 50-7 Picayune.

The next and final score of the game came from senior running back Winston Drain who capped off an impressive 65-yard, 9-play drive, with a 13 yard run, halfway through the 4th quarter.

Blue Devil Head Coach Jacob Owen was disappointed with his team’s performance Friday night, but he applauded the Blue Devils for showing great effort throughout the night.

Hornets secure win against Bulldogs in first round of…