Hornets beat Eagles 49-28, advance to the next round in playoffs 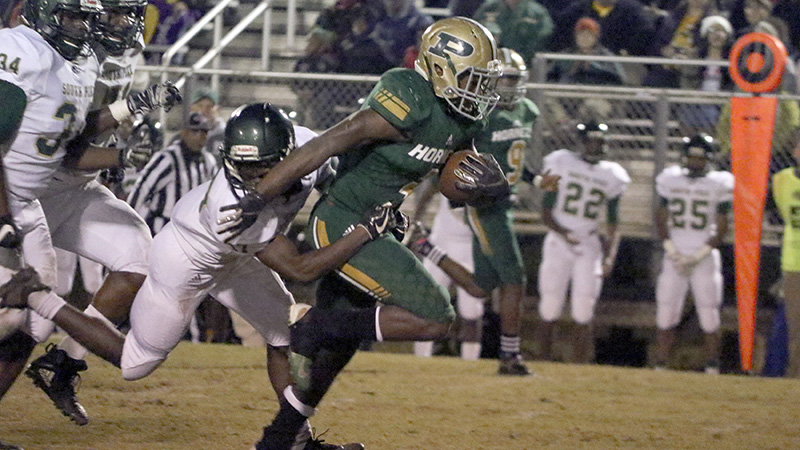 NO STOPPING THE HORNETS: Ahmad Bolton fights off a South Pike defender during Friday’s win that will allow the local team to once again play for the south state championship title. Photo by Jeremy PIttari

POPLARVILLE – Chase Shears ran for 343 yards and five touchdowns to help lead the Poplarville Hornets to a 49-28 victory over the South Pike Eagles in the third round of the Class 4A playoffs Friday evening.

With the win, Poplarville (12-1) advances and will travel to East Central for the right to represent the South Region in the state championship. The state championship game will be played at M.M. Roberts Stadium on the campus of the University of Southern Mississippi in Hattiesburg.

After an Eagle punt to begin the game, Shears scored the first touchdown of the game on the first offensive play of the evening for the Hornets on an 83-yard run. Ethan Spiers’ point-after-touchdown attempt was good, and Poplarville led 7-0 at the 10:27 mark of the first quarter.

South Pike (11-3) on the next drive picked up one first down on the next possession and then was forced to punt four plays later. A bad snap by the Eagles forced punter Tyrese Carter to delay his kick, allowing it to be blocked by the Hornets’ Mario Barnes. Poplarville gained possession at the South Pike 22-yard line. Four plays later, Hunter Martin scored on a 10-yard rush. Spiers’ PAT was good and Poplarville led 14-0 with 5:44 remaining in the opening quarter.

The Eagles scored its first touchdown of the contest on a 10-play, 83-yard drive that culminated in a 39-yard Alex Adams rushing touchdown. The two-point conversion attempt failed, and Poplarville led 14-6 at the 2:09 mark of the first quarter.

Four plays into the Hornets’ drive, Shears answered with a 77-yard scoring run for second score of the evening. On the final play of the quarter, Spiers’ PAT was good and Poplarville led 21-6.

Second quarter scoring came after drives that failed to net points before the Hornets began a drive after an Eagle punt at the South Pike 46-yard line.

Three plays later, Shears scored on a 20-yard touchdown run. Spiers’ PAT was good and Poplarville led 28-6 with 4:26 remaining in the second quarter.

The Eagles answered with a score that culminated with 32-yard score on a pass from Chris Royal to Adams with 2:28 remaining in the first half. Royal and Adams connected again for a successful two-point conversion attempt to cut the lead to 28-14 at halftime.

Second half scoring started on the second play when Shears added his fourth touchdown on a 66-yard scoring run. Spiers’ PAT was good and Poplarville led 35-14 at 11:14 mark of the third quarter.

South Pike answered on its first drive of the third quarter on a six-play march ending with a 15-yard rushing touchdown by Adams. The two-point conversion attempt failed and Poplarville led 35-20 with 9:15 remaining in the quarter.

The Hornets responded with a 15-play, 67-yard drive that removed 7:24 off the third quarter clock. Six different Hornet backs carried the ball on the drive. Corey Knight capped the drive on a three-yard touchdown run. Spiers’ PAT was good and Poplarville led 42-20 with 1:51 left in the third quarter.

The Eagles moved the ball 75 yards in five plays to add its final points of the evening. The drive culminated with a Deldrionn Amos pass to Adams for a 40-yard touchdown reception. Amos converted the two-point conversion on a running play to make the score 42-28 with 24 seconds remaining in the third quarter.

Poplarville failed to score on its next possession and punted the ball away to South Pike.

The Eagles moved the ball 75 yards on 11 plays before the Hornets stopped the scoring threat at its 11-yard line with 5:04 remaining in the game. Two plays later, Shears added his fifth and final touchdown of the evening on an 87-yard scamper to the end zone. Spiers’ PAT was good and Poplarville led 49-28 with 4:12 remaining in the game.

The team went on to claim a 21-point win and finish with a perfect 7-0 home record for the season.